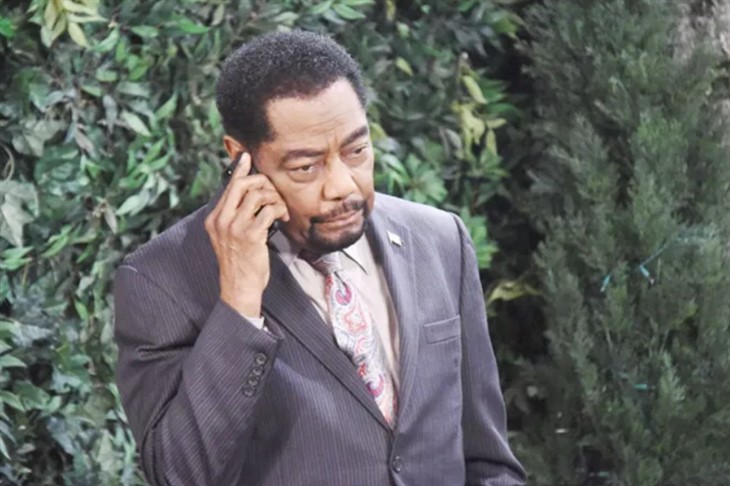 Days of Our Lives spoilers reveal that Paulina Price (Jackée Harry) really did a number on Abe Carver (James Reynolds). He began having serious feelings for her and then to find out about Price Town was incredibly hurtful. After he breaks up with Paulina, Abe goes through a difficult time. Can John Black (Drake Hogestyn) and Marlena Evans (Deidre Hall) help their friend?

DOOL spoilers reveal that Paulina has been lying to Abe from the beginning. Once she set her sights on turning Horton Town Square into Price Town, the secrets and manipulation became more complex. She needed Abe’s approval to get the property rezoned for Price Town. However, she knew that he would never be on board with her plan. So, she lied and schemed to get what she wanted.

Now that the truth is out, Abe has put a temporary stop to the demolition. However, it appears that all the paperwork is in order. So, he faces the issue of stopping Paulina’s plan permanently or she’ll have to give it up voluntarily.

When Abe found out the truth, he broke up with Paulina. She attempted to explain her decision, but the sob stories just weren’t cutting it. Plus, Abe told her that he’ll never believe anything she says again. How will he ever know if she’s lying or telling the truth?

It is teased that Abe is going to be having a rough time as he deals with the fallout. He has a broken heart and everyone in town will want answers. He also might have his position as mayor be in jeopardy. With others noticing Abe is so down, we have to wonder if he’ll slip into a depression.

Days of Our Lives spoilers reveal that John and Marlena will try to help Abe. It’s normal for people to feel down after a breakup. However, for “Jarlena” to take action and try to lift Abe’s spirits suggests he’s more than just a little down. With everything on the line because of Paulina’s manipulation, he could experience a downhill spiral.

It sounds like Abe will be struggling with more than just heartbreak. He is passionate about Salem and the Horton legacy. If he can’t stop Price Town, he will blame himself. Locals might start questioning his judgment and his political career could be destroyed. The Horton family are his good friends and some of them might blame Abe for Paulina ruining a piece of Salem history.

Days Of Our Lives Spoilers: Bonnie Tells Kayla Her Secret, Justin Says No To Marriage Proposalhttps://t.co/j8VYsqoHCF

Plus, there is the issue with Theo Carver (Cameron Johnson) and Ciara Brady (Victoria Konefal). The couple plans on getting married, but Abe warns his son that he should postpone the wedding. He probably doesn’t delay it as he wants to seal the deal with Ciara. However, when the bride-to-be starts to remember Ben Weston (Robert Scott Wilson), Theo could suffer a broken heart. This might also weigh heavily on Abe in addition to everything else going on. Will John and Marlena be able to help Abe get through all of these issues piling on his shoulders?