Days Of Our Lives Spoilers: Lucas Horton Confesses His Affair With Sami DiMera To Philip Kiriakis 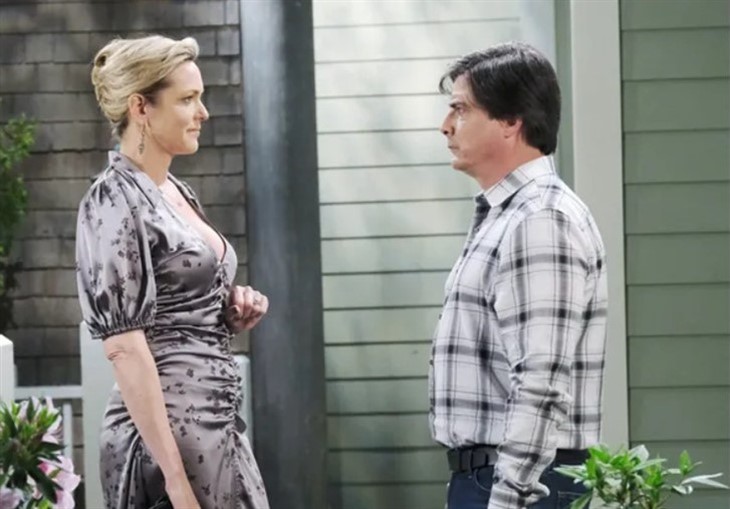 Days of Our Lives spoilers tease that Lucas Horton (Bryan Datillo) will confess his affair with Sami DiMera (Alison Sweeney) to his half-brother Philip Kiriakis (Jay Kenneth Johnson) in an upcoming episode of Days of Our Lives!

Days of Our Lives viewers will recall that when Kristen DiMera (Stacy Haiduk) was threatening to spill the tea to EJ DiMera (Dan Feuerriegel) about Sami and Lucas’ affair, Lucas was to lure Chloe away from Brady Black (Eric Martsolf). Lucas had tried to do so by making up a fake brain tumor, which Sami showed up as Stan (Dan Wells) to corroborate the brain tumor.

Days Of Our Lives Spoilers: Chanel Dupree Admits Her Feelings To Allie Horton

Lucas had tried to get Chloe to go to Antarctica with him to see penguins in the wild! Days of Our Lives viewers may wonder why Lucas would confess this affair to Philip, and it may be because Chloe has told Philip about Lucas faking a brain tumor and Philip wants details!

Lucas has already been grilled by Nicole Brady (Arianne Zucker) about the brain tumor and she had already figured out that Kristen had blackmailed him and Sami over something for him to make up that wild tale to Chloe. She figured out exactly what it was too and had confronted Lucas over it in a recent episode of Days of Our Lives!

Lucas and Philip aren’t exactly close as brothers, and Lucas is not well known for telling personal details about his life to him. Chances are, Philip has heard about Lucas’ fake brain tumor and the drama surrounding it from Chloe, and conversations about Kristen she has also had with Philip.

As Days of Our Lives viewers might imagine, Lucas might feel like the whole world knows about him and Sami now, as he has been grilled by Nicole and now he finds out Chloe talked about the fake brain tumor! Of course, Lucas and Philip’s mother, Kate Roberts (Lauren Koslow) did a little bit of faking herself which Lucas wasn’t appreciative of and Philip may not even have known – but he soon will. It may also come up in conversation with Philip as Lucas tries to explain the fake brain tumor story and what led up to it.

Days Of Our Lives Spoilers: Jake And Gabi Discover Sami’s Affair, Will They Use It Against E.J.?https://t.co/OpJZZWFztw

Lucas may explain that his fake illness story had a much better reason behind it than revenge, like their mother’s did! Of course, as Days of Our Lives viewers will figure, Philip will want more details, and perhaps Lucas may just be so angry at EJ and how Sami just believed all what Lucas considers being lies, that he’ll spill his guts!

But after he confesses what happened between him and Sami to his brother, Philip will want to help out. Later on in the week Lucas and Philip will plot together how to “rescue” Sami from EJ, and will decide to do something or tell something to blow up their marriage.

They will want to protect Sami, so telling EJ about Lucas and Sami sleeping together is not going to be in the plan! They will need to find something to expose EJ over that will make Sami mad enough to blow up her own marriage, so it will have to be something provable that will show her EJ is anything but the old EJ she fell in love with!