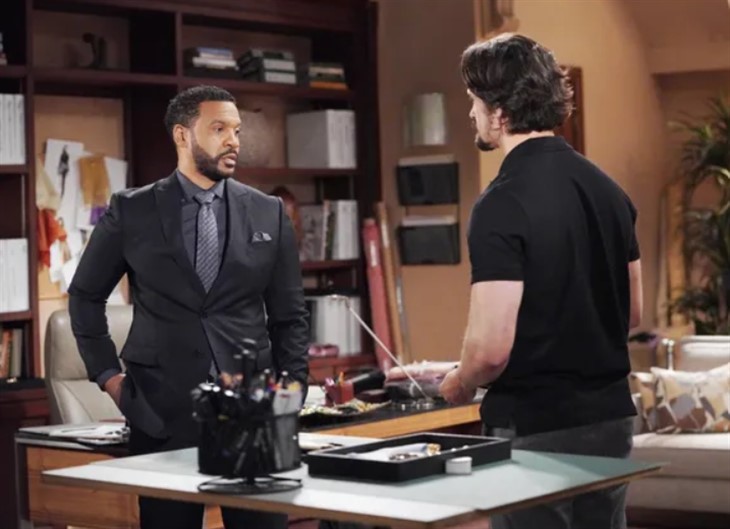 The Bold and the Beautiful spoilers document that Thomas Forrester (Matthew Atkinson) and Hope Spencer (Annika Noelle) found a way out. The blue and silver crow bar that was laying on the floor of the mechanical room, in the basement of the building that is Spencer Publications home base, meant that Thomas escaped. So, one problem was solved.

Justin Barber (Aaron Spears) didn’t answer Ridge Forrester’s (Thorsten Kaye) question. He didn’t respond to a father-to-father plea for help either. Instead he told Ridge that he had to handle something that was overdue.

The something was Thomas. Justin felt compelled to kidnap Atkinson’s character after learning that he was in possession of proof that would at least set Liam free and likely help Dollar Bill Spencer (Don Diamont) as well.

The Bold And The Beautiful Spoilers: Katrina Bowden’s Fur Baby Puffin Had A Terrifying Fourth Of July Scare

Thomas knew that Justin had no grudge against him, but was a victim of Bill’s mind games. However, Thomas’ attempts to reason with Justin didn’t work and he was kept in that cage.

Vincent Walker (Joe LoCicero) had a devious plan. He made it appear as though Liam tracked and then ran him down on Mulholland Drive in retaliation for the paternity test being rigged.

The video Vinny sent to Thomas proves otherwise. The problem will be in showing Martin’s character that evidence because Justin still had Thomas’ phone when the escape happened.

But there is another problem, even if Justin is convinced to turn the phone over. He deleted Vinny’s video. However, an earlier scene was likely filmed in order to address this circumstance.

The Bold And The Beautiful (B&B) Spoilers: Liam Spencer Is A Free Man https://t.co/ZasUVbgxlj pic.twitter.com/mcRCSlUyPm

The Bold And The Beautiful Spoilers – Backing Up A Smartphone

Zende Forrester Dominguez (Delon de Metz) helped Thomas with his phone after he reset it. Viewers recall the specific dialogue that took place in the Forrester Creations’ design room.

Thomas was asked by his cousin if he backed up his phone. Atkinson’s character wasn’t sure if he did, with that point in the plot proving pivotal now.

So, the video will need to be pulled from the cloud or some other evidence will be needed in order to prevent Liam from being moved to a high security prison. It feels like momentum is on his side, with Thomas and Hope teaming to clear Liam’s name.