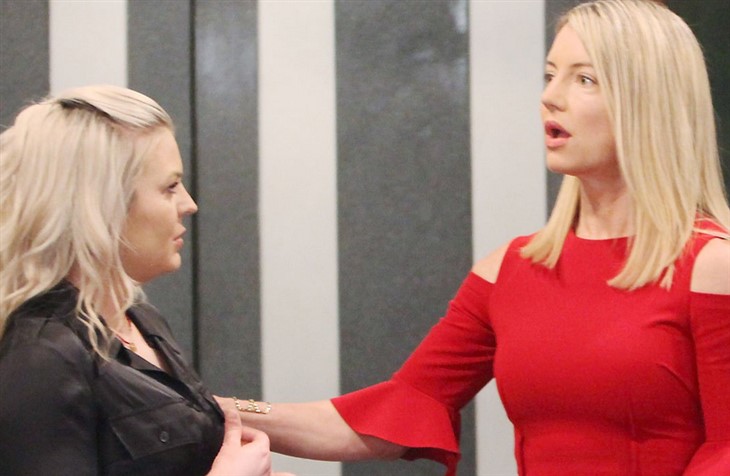 General Hospital Spoilers tease that Maxie Jones (Kirsten Storms) is suffering in silence right now. She gave her baby to Brook Lynn Quartermaine (Amanda Setton) to keep safe from the baby’s father, Peter August (Wes Ramsey), who was revealed to be murdering criminal. She has let everyone else think that her baby was stolen right after birth.

But Maxie wants to see her baby and keeps showing up at the Quartermaine mansion unannounced and people, most notably Monica Quartermaine (Leslie Charleson) are getting suspicious. Maxie needs someone, other than Brook Lynn, to talk to. But who should she pick?

Maxie is very close to Nina Reeves (Cynthia Watros). Maxie was married to Nina’s brother and the two of them are close as sisters. Maxie’s own sister, Georgie Jones (Lindze Letherman) was sadly murdered several years ago by the Text Message killer, so Nina is the closest thing Maxie has to a sister at this point.

But Nina has her own issues. Finding out that her long lost daughter, Nelle Benson (Chloe Lanier) was dead before they could reunite, sent Nina into a tailspin. Eventually, she left Port Charles to visit an old friend in Nixon Falls. But she found something completely unexpected there.

GH Spoilers – Nina Reeves Is Keeping The Fact That Sonny Corinthos Is Alive And Well.

When she arrived in Nixon Falls, she discovered that Sonny Corinthos (Maurice Bernard) wasn’t dead but living as a man named “Mike”. He is suffering from amnesia. Nina had planned to call Sonny’s wife, Carly Corinthos (Laura Wright), but Carly was horrible to Nina on the phone so Nina kept the truth to herself.

Even more distressing, Nina is drawn to “Mike” in a romantic way even though she knows he isn’t in his right mind at this time. But Nina has kept this a secret, except for a couple of slips to toddler, Wiley Corinthos (Erik and Theo Olsen). She might be able to keep Maxie’s secret given this.

General Hospital Spoilers – Nina Reeves Might Be The Perfect Person For Maxie Jones To Confide In.

Nina hasn’t decided if she is going to stay in Port Charles or return to Nixon Falls. Her heart is really torn. But that doesn’t mean she will let Maxie down. It seems likely that Nina would be a great sounding board. Not only that, but she will likely keep Maxie’s secret as well as she has kept the truth about Sonny a secret. A lot as she doesn’t tell little, Wiley, Maxie’s secret should be safe. And Nina truly loves Maxie and will do whatever she can to help her.

Should Maxie confide in Nina? Is Nina the best choice given the situation with Sonny? Will Nina end up being a big help or just another problem for Maxie to deal with? Secrets are sometimes hard to keep in Port Charles so stay tuned to General Hospital airing weekdays on ABC. And don’t forget to check back right here regularly for all your General Hospital news, information and spoilers!