Days Of Our Lives (DOOL) Spoilers: Justin and Bonnie Are Getting Married 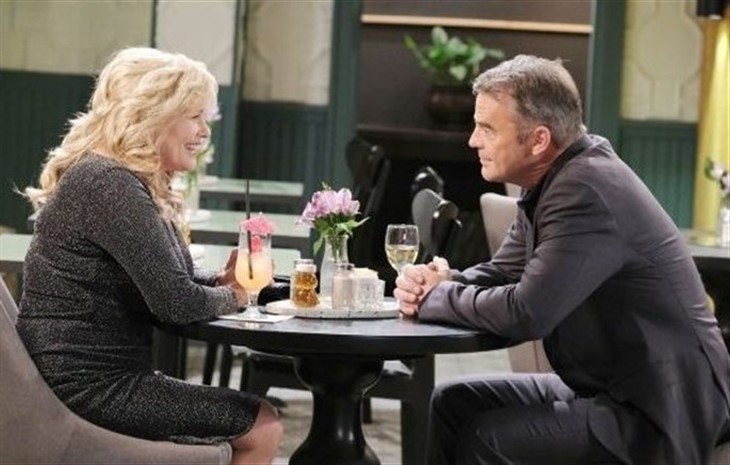 Days of Our Lives (DOOL) spoilers reveal both Bonnie and Justin proposing marriage this week because they obviously took a cue from Sarah and Xander and we all saw how well that worked out.

It’s Bonnie (Judi Evans) who makes the first move when she asks Justin (Wally Kurth) to marry her this week on Days of Our Lives. But she is devastated and runs away when he turns her down. Just has to go after her and explain — and he does so by going down on one knee and proposing himself. He said no because he wanted to be the one to do the asking.

Days Of Our Lives Spoilers: Lucas Horton Confesses His Affair With Sami DiMera To Philip Kiriakis

Of course, an ecstatic Bonnie says yes, of course she will marry him. Justin is thrilled but later taken aback when he learns Bonnie quickly asks Kayla (Mary Beth Evans) to be her maid of honor. He thinks having Steve (Stephen Nichols) and Kayla in the wedding would be awkward but Bonnie tries to convince him if they can accept them as a couple, then everyone would.

At least the people of Salem can admit that Bonnie is the spitting image of Adrienne and that’s how she’s been able to switch places with her so many times, but isn’t it odd that Justin would fall for his dead wife’s doppelganger. This marriage idea just doesn’t seem healthy for Justin or Bonnie. Justin has to see her as Adrienne, the mother of his children who he fell in love with decades ago. And Bonnie will always live in the shadow of Adrienne, which can’t be good for Bonnie.

Also, if DAYS still wanted to pair Wally Kurth and Judi Evans, then why kill Adrienne? It never made sense to learn after the time jump that Adrienne had died and Bonnie was now a wealthy author dressing like Adrienne. The only way this story and marriage can actually work is if we learn that Bonnie really is Adrienne with a microchip in her brain making her believe she is Bonnie. We’re sure Dr. Rolf (Will Utay) could have pulled that off for whatever reason if he wanted to. So, maybe that is endgame here. Otherwise, this marriage makes no sense. Stay tuned to Days of Our Lives weekdays to see who Justin really marries — if anyone.