The Young And The Restless Comings And Goings: Melissa Claire Egan Out As Chelsea 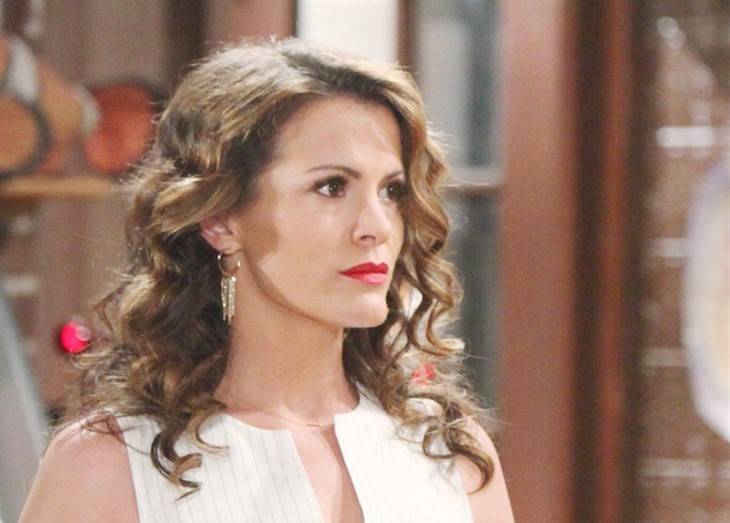 The Young and the Restless comings and goings reveal the end of Chelsea Lawson — for now. Chelsea is leaving town once again, but that doesn’t mean she won’t be back. Melissa Claire Egan is off the set as she awaits the birth of her first child and Chelsea is off to play mother to her mother.

Is there any reason to believe Chelsea did not name Connor just that for a reason? She’s quite a con who can never stop. She managed to con her way out of a mental hospital to care for her ailing mother, when she didn’t even belong in a mental institution. She belonged in jail because she is not crazy. She is just…not a decent human being. But the con worked to write Melissa Claire Egan off the soap until she finishes her maternity leave.

Word is we will still see Chelsea in pre-taped scenes making phone or video calls but she’ll take a few months off of causing trouble for everyone who crosses her path.

In April, Egan announced via Instagram that her dream was coming true. She is due with a baby boy in August after a lot of heartache to get there, including two previous miscarriages. Her Instagram post reads as follows:

The Young And The Restless Spoilers: Victoria And Ashland Move In Together, Great Love Story Teasedhttps://t.co/50ZdEwih2l

“Very excited to share, Baby Boy Katrosar is set to arrive at the end of August. As happy as we are, the journey to get here has been filled with lots of tears, stress, sadness, helplessness, hopelessness, and 2 miscarriages. To anyone going through this process or any kind of fertility issues, I feel you, I see you, you’re not alone. I wish I could jump through this phone and give you a big hug. Please do not give up hope. Keep trusting and have faith. You got this!!!”

Egan has been wearing loose clothes for months on The Young and the Restless as Chelsea hung out in a wheelchair faking paralysis and then spent some time in a mental institution so the soap could hide her pregnancy and keep her on the show. Congratulations to Egan on the impending birth of her son and we can’t wait to see her back on The Young and the Restless soon.