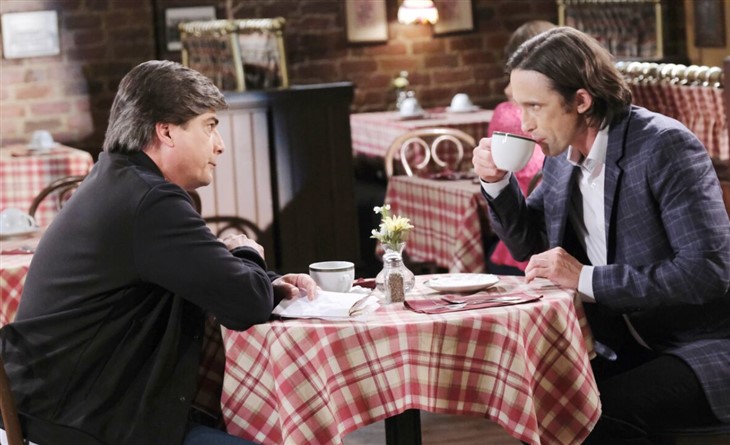 Days of Our Lives (DOOL) spoilers for the week of July 19 reveal that Philip Kiriakis (Jay Kenneth Johnson) gives his brother an idea. He suggests that Lucas Horton (Bryan Dattilo) use Nicole Walker Brady (Arianne Zucker) to ruin Sami DiMera’s (Alison Sweeney) marriage. However, Sami might not automatically turn to Lucas. She just might fight for her husband’s forgiveness.

DOOL spoilers reveal that Lucas needs someone he can talk to about his frustration. He turns to Philip and tells him about the affair with Sami. He will likely also vent about how much he hates EJ and doesn’t understand why Sami went back to him. That is when Philip makes a suggestion. He tells his brother that maybe he should expose the affair.

Days Of Our Lives (DOOL) Spoilers: Justin and Bonnie Are Getting Married

Lucas doesn’t want to tell EJ about the affair because Sami would never forgive him. What if someone else does the dirty work, though? During the week of July 19, Philip tells his brother to use Nicole’s bitterness to his advantage. After all, Nicole didn’t think twice before trying to manipulate Lucas to get the dirt on Sami. She even used Allie Horton’s (Lindsay Arnold) baby to try and trick Lucas into giving up Sami’s secret.

Days of Our Lives spoilers reveal that Sami is the schemer and manipulator. Lucas really isn’t that type of person. However, he is getting sick and tired of always losing. He typically comes in last with everything, including romance. So, Lucas might seriously consider Philip’s suggestion. Nicole is definitely bitter and resentful.

Sami convinces Xander Cook (Paul Telfer) to expose Nicole’s cheating during her anniversary party. Nicole has lost Eric Brady (Greg Vaughan) and is looking for revenge. So, it would be easy to push her to expose “Lumi.”

Days Of Our Lives (DOOL) Spoilers: Allie Tries To Get Ciara Brady To Remember Her Wedding To Benhttps://t.co/RGWEKeHOsV

Philip and Lucas think that when EJ DiMera (Dan Feuerriegel) finds out the truth, he will kick Sami to the curb. He very well might break up with Sami, but the woman is known for her fierce determination. She might have some lingering feelings for Lucas, but feels that her life is with EJ.

Remember, “Ejami” recently had a conversation about their troubled marriage. He knows that Sami was pushed away, so he might consider this when finding out about “Lumi.” EJ and Sami also made a promise to each other. They wouldn’t allow anyone else to tear them apart. Sami will probably remind EJ of this and tell him the affair was before he came to Salem. So, Lucas might not get the girl by blowing up her marriage. He just might compel Sami to fight for EJ.