General Hospital (GH) Spoilers and Rumors: Chase Displays Violent Tendencies, A Side Effect From The Poisoning? 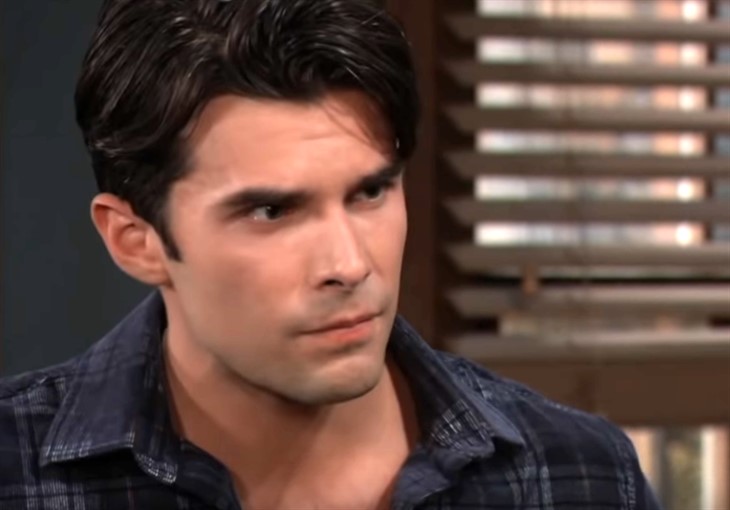 General Hospital (GH) spoilers tease that Michael Corinthos (Chad Duell) and Willow Tait (Katelyn MacMullen) are suffering in silence while Harrison Chase (Josh Swickard) recovers. As viewers know, Willow and Chase were once an item. But Chase lied to Willow and Michael that he was having an affair with Sasha Gilmore (Sofia Mattsson) in order to push them together.

Chase and Sasha believed that it was the only way that Michael could win custody of Wiley Corinthos (Erik and Theo Olsen) was if he was married to Willow so they sacrificed their own happiness for the good of Wiley. But circumstances have changed. Nelle Benson (Chloe Lanier), Wiley’s birth mother, is dead. In the wake of that, and despite the fact that they had fallen in love, Michael and Willow got an annulment.

Willow tried to see if the romance with Chase had any future, but she soon realized that her heart belonged to Michael. Michael and Willow even made love and Willow was prepared to finally to Chase. But then Peter August (Wes Ramsey) had Chase poisoned in an effort to keep Anna Devane (Finola Hughes) from pursuing a criminal investigation against him. Chase’s symptoms grew progressively worse.

Michael and Willow agreed to keep their relationship from Chase a secret and Willow even accepted Chase’s marriage proposal. She believed Chase was going to die and wanted to make his last days happy. They were married just before Hamilton Finn (Michael Easton) found a cure. Chase is recovering although he still has no feeling in his legs just yet. And there’s no telling if the cure Finn concocted will have any other side effects.

Chase has always been extremely level-headed and almost child like in his innocence. But if he doesn’t get the use of his legs back as quickly as he hoped, could his personality take a darker turn? There really isn’t a bad guy in the whole triangle and if Chase’s actions going forward can be blamed on the cure, than he can go back to being a good guy. But Willow may suffer at Chase’s action or harsh words, especially once he finds out that she really loves Michael. It’s a shame, but no matter what happens, a good person is going to be hurt.

Will Chase temporarily go dark personality wise? Could Willow actually suffer some sort of abuse at Chase’s hands due to his inability to walk or an adverse side effect of the cure, at least verbally? Who should Willow ultimately end up with, Chase or Michael? Good deeds rarely go unpunished in Port Charles so stay tuned to General Hospital airing weekdays on ABC. And don’t forget to check back regularly for all your General Hospital news, information and spoilers!