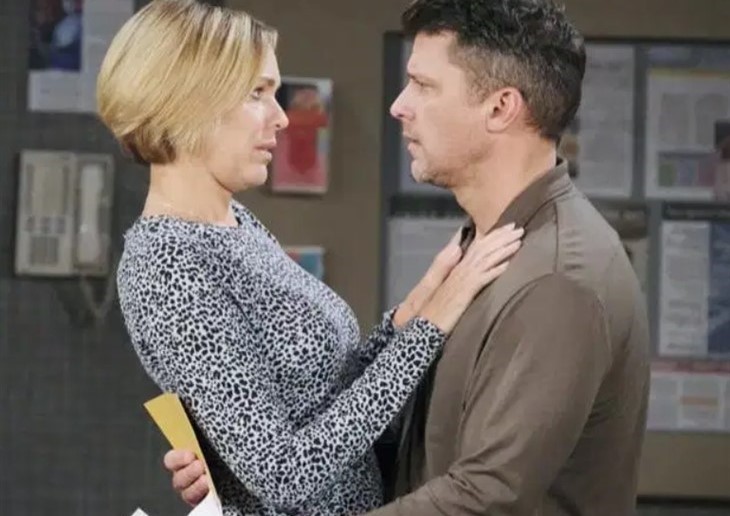 Days of Our Lives (DOOL) spoilers tease that Eric Brady (Greg Vaughan) will ask Nicole Brady (Arianne Zucker) if Xander Cook’s (Paul Telfer) accusations are true in an upcoming episode of Days of Our Lives!

Days of Our Lives viewers will recall that Nicole and Sami DiMera (Alison Sweeney) have been threatening each other with exposure of their affairs, Nicole’s with Xander and Sami’s with Lucas Horton (Bryan Datillo).

Days of Our Lives viewers will recall that it has basically been a case of the pot calling the kettle black, with Xander knowing about both affairs – Nicole’s with him, and knowing about Sami’s with Lucas, at least twice! To complicate matters, Kristen DiMera (Stacy Haiduk) had blackmailed Sami with the knowledge of her affair with Lucas, threatening to tell EJ DiMera (Dan Feurreriegel) and then sending him a letter about it anyway!

Gabi Hernandez (Camila Banus) found the letter when she went to pick up the mail, and Jake DiMera (Brandon Barash) read it, intending to use it against EJ but Gabi didn’t want her friend Sami to be hurt over it so she gave it to Sami.

Sami was almost caught by EJ as she put it in the fireplace, and later found matches and set it on fire only to have Chad DiMera, (Billy Flynn) who apparently was watching her, go and get the partially burned letter out of the fire! It’s a good possibility that he retrieved it for later leverage! Nicole thought that she had everything “fixed” but then Sami apparently had some leverage on Xander, who she has convinced to bust up Eric and Nicole’s anniversary party!

All the while this is going on and Nicole was pleasantly surprised to see Eric, in the background Lucas has been conspiring to break up EJ and Sami with Philip Kiriakis (Jay Kenneth Johnson). Perhaps Philip and Chad are in cahoots. Sami finds out her secret isn’t as safe as she thought it was, which makes her even more determined to expose Nicole’s sins to her twin Eric! Days of Our Lives viewers know that the only reason that Nicole got herself into this predicament is because Eric had been gone in Africa for a whole year, finally coming back for a visit close to their first anniversary!

Longtime Days of Our Lives viewers will remember that Nicole and Eric had wanted to marry for years but something always went wrong – someone else got in the way – or someone was presumed dead in a warehouse explosion, namely Nicole! Nicole happily let Eric go on the mission to Africa after they were only married for barely a couple of weeks, figuring he would not be gone that long.

Weeks turned into months turned into close to a year, and Nicole was so upset she went to Brady’s Pub to drink away her sorrows, and Xander was there. They drunkenly spent a sinful night together at the Salem Inn and Sami had seen them stumble in together. Now, at their first anniversary party, right in front of everyone, Xander has told the tale of their sordid sinful night, and Eric is blindsided! He wants to know if the accusations are true! Nicole may not have any other choice but to confess to the former Father Eric! Will this be the end of “Ericole?”