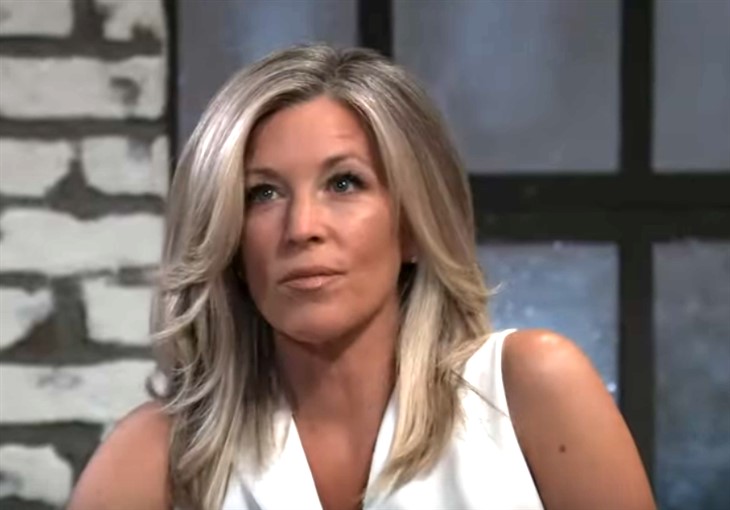 General Hospital (GH) spoilers tease that Carly Corinthos (Laura Wright) seems to always wind up landing on her feet. But it may not be all that long before she falls from grace. While at face value, Carly knows her upcoming wedding to Jason Morgan (Steve Burton) is one of convenience, but it’s also very likely that Carly is secretly thrilled with this turn of events. Judging by her harsh words to Dr. Britt Westbourne (Kelly Thiebaud) recently, Carly is secretly loving the fact that she finally has Jason exactly where she wants him.

As of now, all of Port Charles, including Carly, believes her husband Sonny Corinthos (Maurice Bernard) is dead. But Sonny is alive and well, albeit with amnesia, and living in the small town of Nixon Falls where he works as bartender at the Tan-O. While he doesn’t remember his previous life as the Mob Kingpin of Port Charles, he has found romance with Nina Reeves (Cynthia Watros), who happened to come across Sonny while visiting her old friend/nurse Phyllis Caulfield (Joyce Guy). Nina had planned to reveal Sonny’s existence to Carly, but Carly was so horrible to Nina she hung up the phone instead. But it’s only a matter of time before Sonny gets his memory back.

GH Spoilers – Sonny Corinthos Will Want To Take His Business Back.

There’s little doubt that Sonny will want to resume his previous life. But finding out that Carly and Jason got married, although just for the sake of the business, may not be music to his ears. In fact, he will likely understand that Jason only did it to keep the family safe, his may just see that Carly was more than happy to be Jason’s wife. He may very well cut her loose, especially if his feelings for Nina don’t just go away. Add that to the fact that Jason will no longer need to be married to Carly once Sonny has returned and Carly may just end up very much alone. The truth is, Jason has feelings for Britt and will want to be with her, assuming she will take him back.

Will Jason and Carly actually get married? And how long will it be before Sonny returns. Will he kick Carly to the curb and pursue Nina? Will Carly suddenly find herself alone? The mighty can fall mighty hard in Port Charles so stay tuned to General Hospital airing weekdays on ABC. And don’t forget to check back right here regularly for all your General Hospital news, information and spoilers!