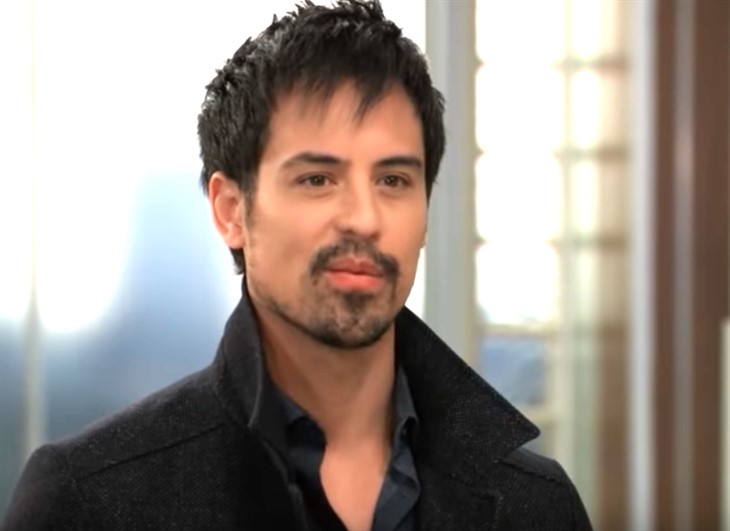 General Hospital viewers will remember that Nikolas spoke to Attorney Martin Grey (Michael E. Knight) in a recent episode of GH. Nikolas intended to talk to him about a divorce, which he really doesn’t want to go through with in the first place, but if Ava Cassadine (Maura West) will only feel safe if they are divorced, he will do what it takes.

In their conversation, Nikolas brought up the stalker and Martin told him that the police found evidence of footprints in the fake blood that they knew weren’t from Nikolas’ or any of the first responders’ shoes. Nikolas had not been informed about that and of course felt that he had the right to know.

Nikolas tried to capture the stalker by setting a trap, but as General Hospital viewers will recall, it backfired on him when Trina Robinson (Sydney Mikayla) triggered it instead of the stalker, and he got pepper sprayed in the eyes for his trouble!

Meanwhile the stalker, who it appears is his own son Spencer Cassadine (Nicholas Chavez) and Trina later got caught in what appeared to be Spencer’s “trap” of fake blood coming out of the sprinkler system! Father and son both got caught in their own “traps” thanks to Trina! Nikolas, of course will want to be on the call list of the Port Charles Police Department regarding any progress made in identifying and capturing the stalker!

General Hospital viewers know that Nikolas and Laura Collins (Genie Francis) both really should check up on the whereabouts of Spencer. They should not put it past Spencer, who was smart enough to tamper with voting machines when he was only ten or twelve years old to be able to make this kind of mischief!

Laura is quite concerned with what has been going on as well and has been trying to bolster Nikolas and reassure Ava, as General Hospital viewers will recall. Nikolas goes to the Port Charles police department to talk to Jordan about the footprint that Martin told him about. He wants to know if there has been any progress on identifying and finding the stalker through the footprint.

Jordan cautions him that he should not expect an instant arrest. However, one advantage that the police have is that the shoe the prints came from does not appear to be one made in the United States! That would mean that the person has either travelled in Europe and returned but without knowing a precise location of purchase, it may not be something they can track the wearer with.

GH Spoilers– Jordan cautions, the shoe being from an overseas source

Also, Jordan cautions, the shoe being from an overseas source doesn’t mean the person has been overseas – they could have ordered the shoe. Sources to order shoes on the Internet are about as many as pieces of hay in a haystack! She does assure Nikolas that she will keep him up on the investigation, as well as his mother and Ava. Nikolas will just have to wait and see if something more substantial comes from the search for the source of the shoes!