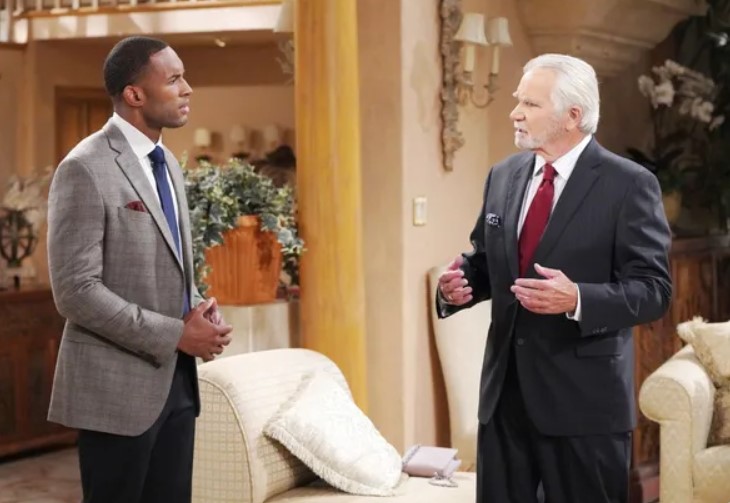 The Bold and the Beautiful (B&B) spoilers reveal Eric Forrester not playing around. He is angry and he wants out of his marriage as fast as possible. That’s why when Carter tries to resign as his lawyer and Forrester Creations lawyer, Eric won’t let him.

The Bold And The Beautiful Spoilers – Make Carter Walton Suffer

Eric (John McCook) doesn’t want Carter (Lawrence Saint-Victor) to resign. He wants him to represent him in his divorce and make sure Quinn (Rena Sofer) is somehow left penniless. He wants Carter to squirm as he does this and for Quinn to pay with all the riches she could have had if she had not strayed. Eric is not thinking of the wives he has cheated on, but at least he never cheated on Quinn, right? He just refused to make love to her, which can be kind of humiliating for some women.

While Carter can turn Eric down, he won’t because he feels guilty and because it won’t make a good plot point. Eric does ask him to take a parting gift, however. He hands him Quinn’s portrait because he never wants to see it again.

Well, Zoe (Kiara Barnes) is gone and Eric kicked Quinn out of the mansion so why not be with one another? There was a very clear attraction and chemistry there and B&B even gave us some nice love scenes that soaps have been lacking. Now that the two characters aren’t tied to anyone else, they are free to be together. While that may put them on the back burner for a bit, that was bound to happen anyway because nobody stays on the front burner for long on this show unless their name is Liam Spencer (Scott Clifton).

The Bold And The Beautiful (B&B) Spoilers: Thomas’s Escape Might Not Free Liam
https://t.co/fFYmFWSWwX

The Bold And The Beautiful Spoilers – What Happens To Eric Forrester Now?

Well, Donna (Jennifer Gareis) had to confess to Katie (Heather Tom) that she’s still in love with Eric after all this time for a reason. It was a plot point. Saying this as we knew Quinn and Eric’s vow renewal was blowing up told us that Eric is going to soon realize Donna Logan was the one for him all along. That will put Eric and Donna on the backburner, as well, but Donna should be used to that by now. Then we can get back to Liam and his angst, right? Stay tuned to The Bold and the Beautiful weekdays to see Liam take center stage once again now that this mini-story is over.

The Bold And The Beautiful (B&B) Spoilers: Bill And Brooke Tempted Again

The Bold And The Beautiful (B&B) Spoilers: Sheila And Deacon Kiss

The Bold And The Beautiful (B&B) Spoilers: Quinn Tells Shauna Her Secrets And…