Days Of Our Lives (DOOL) Spoilers: Nicole Gets Revenge On Sami For Ruining Her Marriage To Eric 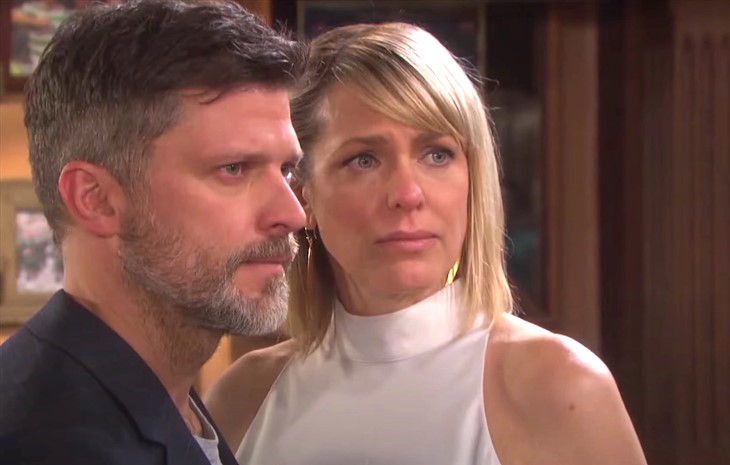 Days of Our Lives (DOOL) spoilers tease that Nicole Brady (Arianne Zucker) will get revenge on Sami DiMera (Alison Sweeney) for ruining her marriage to Eric Brady (Greg Vaughan) in an upcoming episode of Days of Our Lives!

Days of Our Lives viewers will recall from a recent episode of Days of Our Lives, that Brady confronted Xander Cook (Paul Telfer) at Basic Black. Brady had picked up Xander’s cell phone by accident thinking it was his, not knowing that Nicole had it trying to trace Kristen DiMera’s (Stacy Haiduk) number. She had given it to Theo Carver (Cameron Johnson) but it traced back to a burner phone.

Brady tore into Xander, telling him the only reason he had the job was because of blackmailing Nicole. Xander was shocked, not knowing that Brady knows about his and Nicole’s one night stand. Brady accused him of taking advantage of Nicole to blackmail her into giving him a job.

Xander told him go ahead and fire him but if he does, his brother Eric would find out what a cheating tramp his wife was. Nicole then came to work and broke up the fight and gave Brady back his phone after Xander decided to take the day off. Brady was puzzled at Nicole’s insistence she found it in a break room. He hadn’t gone in the room that he remembered.

Days of Our Lives viewers will recall that later, Nicole snarkily tried to get a confession out of Lucas Horton (Bryan Datillo) as she told him that she had “proof” that Lucas and Sami had been sleeping together. Lucas wouldn’t budge but he did report the confrontation to Sami.

Lucas warned Sami on the phone that Nicole was trying to expose the truth about him and Sami. Sami felt terrible for leading Lucas on, because now she wanted to be back with EJ DiMera (Dan Feurreriegel) who was back to being the man she fell in love with and married. She told Lucas about the expensive new necklace he gave her and Lucas assures her it’s not a problem even though he wants her back.

Sami is upset, she cannot let Nicole ruin everything. Unbeknownst to Sami, Lucas had seen her burn the letter in the fireplace from Kristen to EJ and he has it. He still wants her and thought EJ might find this out another way than Nicole exposing them – he then headed over to EJ’s office at DiMera with the letter! Days of Our Lives viewers will recall that even though Sami knew nothing about that, she did know that Brady knew that Nicole and Xander had a one night stand – Xander told her, and now she has something to cross leverage with.

Days of Our Lives spoilers tease that Xander busts Nicole at her and Eric’s anniversary party, which had to be what Sami was hammering out a deal with him about! Yet, Nicole knows that ultimately it had to be Sami who prodded Xander into spilling the sordid tea! Eric, likely blindsided, wants to know if Xander’s allegations are true! Days of Our Lives insiders have leaked that Greg Vaughan only filmed a few scenes and left again, which hints at a permanent breakup of “Ericole”.

Then there’s that confession that Nicole failed to delete from her laptop – might someone find that after Nicole possibly lies to Eric about the one night stand, and that someone is Eric? That would be enough for Eric to leave forever and start divorce proceedings!

Nicole then might bust Sami to EJ, not realizing that Lucas and Philip Kiriakis (Jay Kenneth Johnson) were trying to break them up as well. EJ may already know that Sami cheated on him with Lucas, depending on Lucas’ purpose of going to his office! All in all, it will be one big exercise in hypocrisy between the two women, with pot calling kettle black and kettle calling pot black!