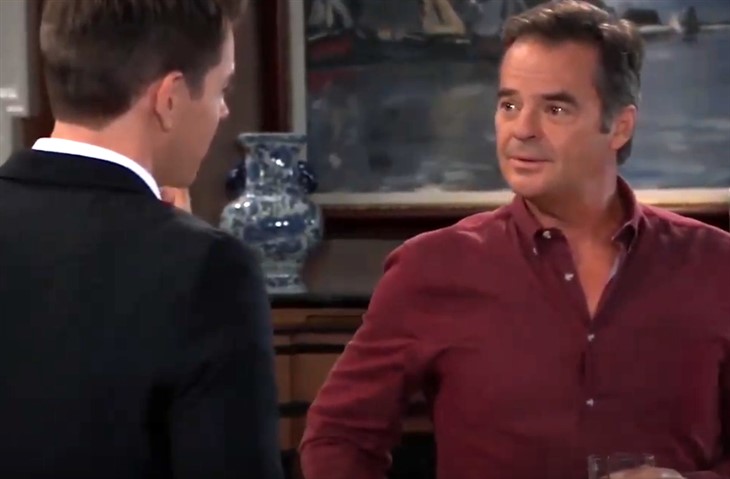 General Hospital spoilers tease that Michael Corinthos, (Chad Duell) Ned Quartermaine (Wally Kurth) and Brook Lynn Quartermaine (Amanda Setton) will come together to do their own investigation of Austin Gatlin-Holt (Roger Howarth) in an upcoming episode of General Hospital!

Jimmy Lee later married Charity Gatlin (Gloria Carlin) a store owner in Pautauk, New York who Alan Quartermaine (Stuart Damon) had been involved with during a time of faking his death and later suffering amnesia.

GH Spoilers: The late Reverend Bradley Ward also would have been a half-brother of Jimmy Lee

Monica Quartermaine (Leslie Charleson) had tracked down Alan, who was going by the name Simon Alexander, and brought him back to Port Charles. Charity was a widow, and had a son named Jonah Gatlin (Scott Curtis). Jonah was eight years old at the time, so that means Austin has an older stepbrother. However, Jimmy Lee and Charity moved away because Jimmy Lee didn’t like all the dysfunction of the Quatermaine family.

It would seem that they moved back to Pautauk after living in Port Charles for a very short time. Longtime General Hospital viewers will recall that Alan and Tracy Quartermaine (Jane Elliot) were Jimmy Lee’s half-brother and sister, making Ned Quartermaine, (Wally Kurth) Dillon Quartermaine, (Robert Palmer Watkins), Jason Morgan, (Steve Burton) Drew Cain (Cameron Mathison) and the late AJ Quartermaine (Sean Kanan) his first cousins. The late Reverend Bradley Ward (Aaron Seville) also would have been a half-brother of Jimmy Lee and an uncle to Austin.

Longtime General Hospital viewers will recall that Jimmy Lee didn’t have anything to do with the Quartermaines nor they with him after he went back to Pautauk with Charity. No heirs’ names were ever mentioned that should be excluded from Edward’s will other than Jimmy Lee, so they must have assumed there were no other Holt children.

So it is understandable that the Quartermaines would want to check out his identity a little more carefully before accepting him as a family member, and especially before letting him touch anything ELQ related! Valentin Cassadine (James Patrick Stuart) may mention the photograph that Anna Devane (Finola Hughes) found in the house that Austin let them stay overnight in, which apparently was the house he grew up in. General Hospital viewers will recall that Anna pointed out she had known Austin’s father, and recognized Austin as a child in the photograph with his parents.

But she hadn’t told him the name at the time. The Quartermaines may say that doesn’t prove anything – he could have been a neighbor’s child familiar with the family! Ned, Michael and Brook Lynn will be suspicious that Austin is an interloper and possibly even a con artist, even though he is a respectable physician who owns a lot of properties in Pautauk and had a private practice as well.