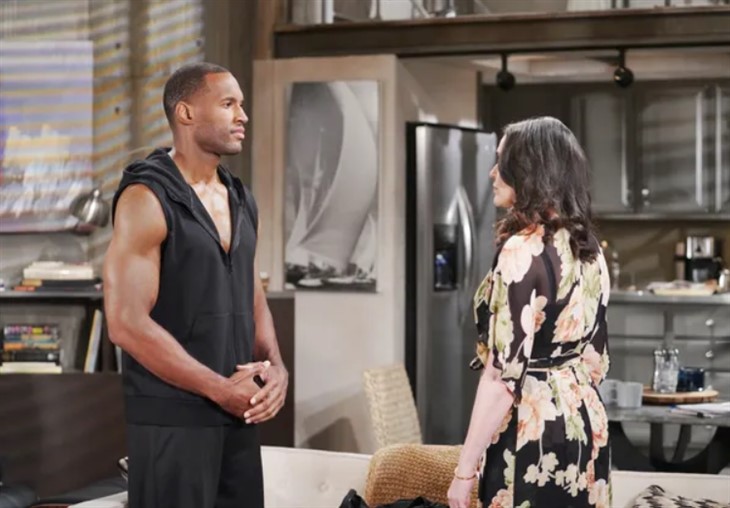 Viewers of The Bold and The Beautiful will remember how Carter broke down and cried when he asked for Eric’s forgiveness with just him and Ridge Forrester (Thorsten Kaye) in the living room of the Forrester mansion. All the guests had left, including Quinn, who Eric had unceremoniously dumped in front of her friends and family – and fired her from Forrester Creations to boot.

Carter may have not even been sure that Zoe Buckingham (Kiara Barnes) had been told what happened, but Paris Buckingham (Diamond White) had already told her sister, on the way out the door on a business trip to Paris, France.

Viewers of The Bold and The Beautiful can expect that Zoe will likely never return. Carter asked Eric’s forgiveness – confessing his weakness and offered to resign. Eric had not accepted his resignation. Ridge made a point that it wasn’t just Carter – it took two to tango and Quinn was at fault also.

Carter said he knew better and had still given in. With Ridge’s help, Eric was able to compartmentalize the feelings he had – mixed feelings of betrayal by Carter and anger at him, but yet realizing he was someone the family had depended upon for years, and had treated and thought of as a family member.

Ridge had also made a point that in a way Carter had saved the family a lot of heartache by exposing Quinn for who she really was. Eric had tried to change Quinn but she was beyond changing or redemption. Ridge told Carter he wasn’t sure they were done with him. Eric admitted his marriage had been on the edge and Carter helped push it the rest of the way.

Eric chose to offer Carter another chance, but there were conditions – he had to stay away from Quinn, and he was to draw up the divorce papers. Ridge clarified if Carter didn’t steer clear from Quinn it would be a conflict of interest in the divorce. Carter didn’t have a problem and said he wouldn’t let them down. Then Eric asked him to take Quinn’s portrait and dispose of it.

Viewers of The Bold and The Beautiful will recall that Carter did tell Quinn about what happened and Eric’s conditions for Carter to stay employed. But even so, Carter and Quinn’s lust for each other is obvious, and they cannot stay away from each other! Quinn is going to need a place to live and a job – or someone to support her, and it is likely that neither her son Wyatt Spencer (Darin Brooks) and his fiancée Flo Logan (Katrina Bowden) will want her to stay with them, nor Shauna Fulton (Denise Richards) because she was way more embroiled in the affair than she wanted to be.

Quinn may be able to keep her jewelry design business independent of Forrester Creations, or possibly reach out to other competing companies. However, viewers of The Bold and The Beautiful will not be one bit surprised if she moves in with Carter! There will have to be even more secrecy if she goes that route – but will they be able to keep it a secret?

With Carter being a friend of the Forrester family as well as an employee, won’t someone at some point goes to his home to see how he is, and possibly find Quinn there? Carter is putting a lot at stake by giving in to his passions and temptations with Quinn – not just his job at Forrester Creations, but his law license!