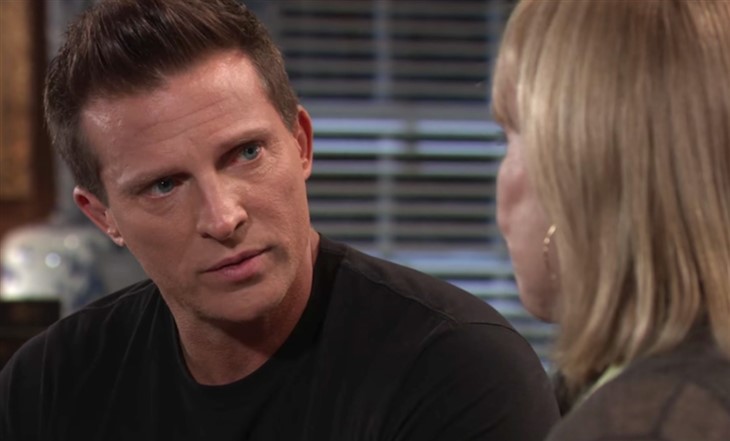 Jason has been a close friend to Carly for many years. He does not want Vincent or the other mafia families to go after her because she had to take over Sonny’s organization. Carly and nearly everyone in Port Charles believe that Sonny died after falling from a bridge in New Jersey. Carly and Jason do not know that Sonny is living in Nixon Falls, Pennsylvania with amnesia. Jason is reluctant to marry Carly because he had gotten into a relationship with Dr. Britt Westbourne (Kelly Thiebaud).

GH Spoilers: Jason has been a close friend to Carly for many years

Jason and Britt needed to go on the run because Cyrus Renault (Jeff Kober) had framed Jason for killing Franco Baldwin (Roger Howarth). Sam McCall (Kelly Monaco) came to help Jason and Britt to leave the country. Jason and Britt got close while they were on the run. Jason helped Britt to face finding out that she had the marker for Huntington’s disease.

Jason made a promise to Britt that he would support her. Britt is keeping her diagnosis from everyone except her mother Dr. Liesl Obrecht (Kathleen Gati). Jason told Britt that he was marrying Carly. Britt turned to Jasper Jacks AKA Jax (Ingo Rademacher) for comfort. Jason told his mother Monica Quartermaine (Leslie Charleson) that he was marrying Carly. Monica tried to show her support for Jason’s marriage.

Jason wants to protect Carly and Sonny’s organization but has found that he cares about Britt. Jason needs help to figure out what he can do about Carly and Britt. Jason can tell Monica about his problems. She will understand that Jason needs to keep Carly out of danger. Monica wanted Jason to be in a different line of work but she has accepted the path that Jason took with his life. Jason has not told Monica about his relationship with Britt.

Monica will be surprised to find out that Britt is important to Jason. Recently Monica became the Chairman of the Board at General Hospital and Britt works for her as Chief of Staff. Monica is unsure about Britt because Cyrus made her Chief of Staff when he was Chairman of the Board. Jason can tell Monica that Britt helped him to get Cyrus out of General Hospital. Jason can tell Monica that Britt helped to save him when he got hurt when he was trying to get away from Cyrus. Monica will be impressed with Britt when Jason tells her what she did to help the hospital and Jason.

Jason has not told Sam McCall that he is getting married to Carly. Sam was upset to find out that Jason was getting married to Carly after overhearing Michael Corinthos (Chad Duell) tell Willow Tait (Katelyn MacMullen) that his mother Carly getting married to Jason. Sam had ended her relationship with Jason because she was concerned about his mafia lifestyle. She was concerned it might bring danger to her children Danny Morgan (Porter Fasullo) and Scout Cain (Ella Ramacieri). Sam wanted to help Jason and Britt because she did not want her children to lose Jason. Sam could see that Britt and Jason were getting close. Sam will wonder if Jason will be able to end his relationship with Britt in order to marry Carly. Sam is going to be concerned that Jason is going to be in more danger because he is marrying Carly.

General Hospital Spoilers – Jason Morgan Is At A Crossroads

General Hospital Jason has a choice to make. He can get married to Carly to protect her and Sonny’s organization. Jason could decide to stay with Britt. Jason needs advice to help him to decide what his next step will be. Monica loves Jason and will want the best for him. Will Monica advise Jason to follow his heart and stay with Britt? Will Monica tell Jason that he needs to keep his family safe and needs to marry Carly?

Sam wanted to have a life with Jason but could not stay with him. Will Sam tell Jason that he needs to put what he wants before Carly and Sonny’s organization? Will Sam tell Jason that he needs to embrace a different future with Britt? Jason may not have any other choice but to marry Carly. Will Jason get support from Monica and Sam if he has to marry Carly instead of being with Britt? Be sure to catch up on everything happening with GH right now. Come back here often for General Hospital spoilers, news, and updates.