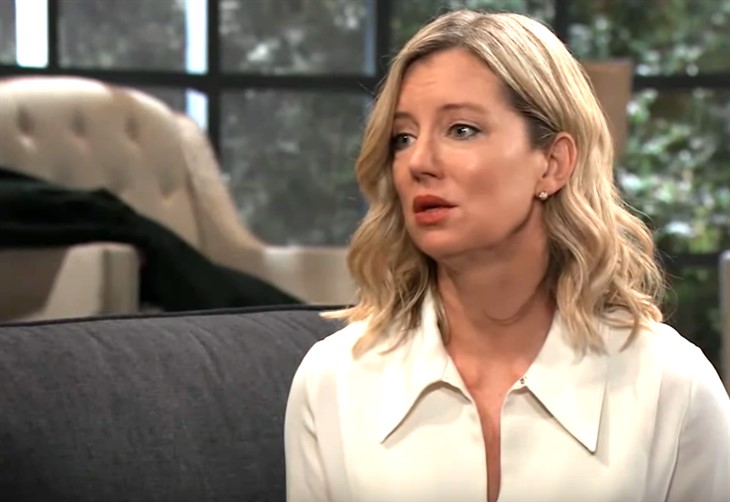 General Hospital (GH) spoilers tease that Nina Reeves (Cynthia Watros) will make a hasty return to Nixon Falls in an upcoming episode of General Hospital. It sounds like she may be on her way to support Phyllis Caulfield (Joyce Guy) after a reluctant update by “Mike” aka Sonny Corinthos (Maurice Benard)!

General Hospital viewers will recall that Sonny had promised the Caulfields that he would take care of the medical bill after Lenny Caulfield’s (Rif Hutton) doctor told him and Phyllis that his heart was not salvageable. Phyllis got online immediately to find a second opinion and a cardiac doctor specializing in Lenny’s particular heart ailment. General Hospital viewers will also recall that Lenny had put up quite a fuss and didn’t want to have expensive medical treatments, especially if they only gave Phyllis false hope and a load of debt for nothing.

Lenny had been quite resigned to dying from the heart ailment, but Phyllis didn’t want to take no for an answer. Sonny promised he would take care of any medical bills the insurance didn’t pay, even though it seemed to be a reflex from his previous life as a very wealthy man who owned a coffee company and has some other not-so-legal “businesses”. But then, he also owned an Italian restaurant, Pozzulo’s, and a gym, Volonino’s Gym.

Plus, Carly Corinthos (Laura Wright) owns a five-star hotel with major Port Charles companies leasing office space on the upper floors, including Nina Reeves. The offices of Crimson Magazine are there. Sonny certainly had no money worries in his former life! “Mike” aka Sonny has called Nina a couple of different times but she has extended her stay, mostly for time with her grandson – and HIS – Wiley Corinthos (Erik and Theodore Olson) but also to support Maxie Jones (Kirsten Storms).

General Hospital viewers will recall that Lenny has been in pretty rough shape – he could have a fatal heart attack at any time, including during the trip to New York City! The specialist works out of New York Methodist Hospital and so the trip may take a few hours. Sonny was going to stay behind and run the Tan-O but apparently decided to go with Lenny and Phyllis to the hospital in New York instead, in case it was bad news because he was waiting with Phyllis and thought something was familiar to him.

General Hospital Spoilers: The Novaks Planning An Attack At Carly And Jason’s Wedding?https://t.co/qDwcw3Odi4

After waiting for Lenny’s return, Sonny has to reluctantly update Nina, and General Hospital viewers know that it may be bad news. Sonny’s update may be that Lenny is near death or possibly worse and Phyllis needs support. Sonny calls from what appears to be the waiting room in the hospital and tells Nina “we need you”.

Nina will waste no time getting back to Nixon Falls, Pennsylvania, possibly even by way of New York City where Sonny and Phyllis may still be in the hospital waiting room. Sonny aka “Mike” wouldn’t ask Nina to pay Lenny’s hospital bills but this may well be what happens. Nina will want to support her old friend Phyllis in any way she can, especially if Lenny doesn’t make it!