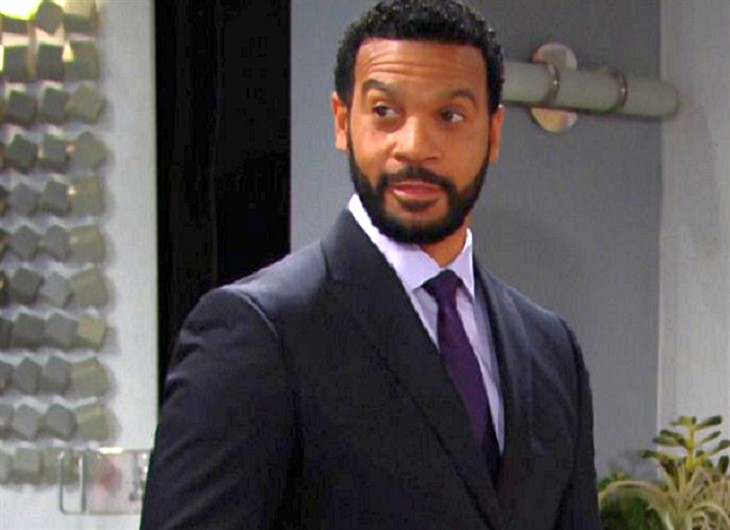 Bill was crushed. Justin came to the office in hopes of receiving Bill’s forgiveness. An series of emotional exchanges took place, ending with a sharp break in this long-time friendship.

The Bold And The Beautiful Spoilers – Justin Barber Made A Mistake

Justin told Bill that he planned on freeing him, but Thomas and Hope Spencer (Annika Noelle) beat him to it. Spears’ character said that he deleted the texts and video from Thomas’ phone, but restored them and then dropped the electronic device at the police station.

It was too late for an apology, as Bill rightly said that Justin stabbed him in the back. Diamont’s character also said that Justin was more to him than an attorney, confidant, and right-hand. He was like a brother.

Spears’ character said that he became someone he didn’t recognize. His confused thoughts resulted from the pressure Bill applied through the years. But Diamont’s character was too worked up to see what happened to Justin.

Something infinitely significant was left out of Thomas’ statements while he was with Bill, Justin, Wyatt Spencer (Darin Brooks), and Katie Logan (Heather Tom). Thomas never said a word about what he did to Justin’s niece, Emma Barber (Nia Sioux), on Mulholland Drive. That was the same stretch of road where Liam Spencer (Scott Clifton) hit Vinny in what proved to be an irrational frame job.

As B&B fans recall, Thomas went much farther off-track than Justin recently did. During one of Thomas’ spells he tailgated Emma off Mulholland Drive because she was on her way to the cabin in order to tell Hope that Beth Spencer (Madeline Valdez and River Davidson) was alive.

It’s reasonable to to speculate about when, if ever, that plot point will be revealed and what impact it would make.

The Bold and the Beautiful (B&B) Spoilers: Has Brooke Gone Too Far – Will Quinn Get Revengehttps://t.co/4Pav3e3vCL

The Bold And The Beautiful Spoilers – Bill Spencer Turns His Back

So, Bill is done with Justin. He said that he never wants to see his face again.

Teasers indicate that Justin will seek out Ridge Forrester (Thorsten Kaye). There’s no alliance to be had there, as Thomas will fill his dad in on what happened.

So, Justin will stay away from Bill if he is truly sorry. Maybe someday an unexpected scenario will allow them to become friends again. Alternatively and because this is daytime, Justin could create a revenge plan or so could Bill.