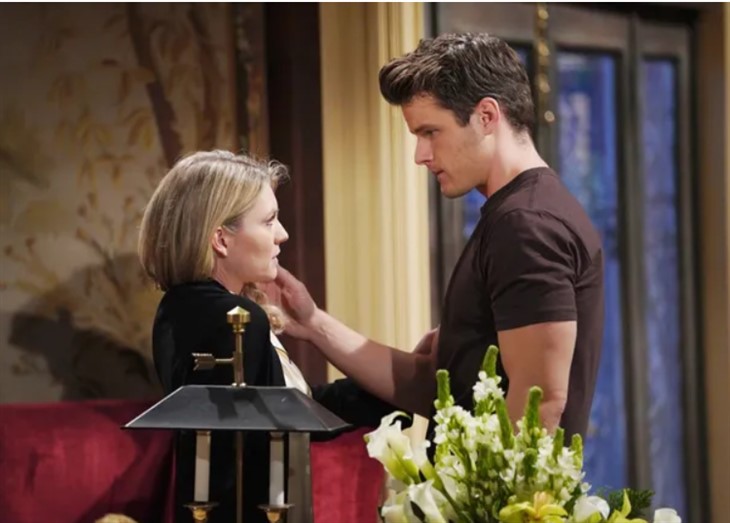 The Young and the Restless (Y&R) spoilers document that Kyle Abbott (Michael Mealor) hasn’t allowed the devastating loss of Summer Newman (Hunter King) to affect the new responsibility he’s gained. Harrison Locke (Kellen Enriquez) is his son and Tara Locke (Elizabeth Leiner) is the woman he’s connected to through him.

Readers of this site know that King and Mealor didn’t renew their contracts. Unless that status changes fans know that both characters are being written off the show. No date is known as to when viewers will last see either half of Skyle.

So, Tara believes she’s defeated Summer and is in the process of winning Kyle’s love. But that is a fool’s game on Y&R.

Sally Spectra (Courtney Hope) has developed and implemented many clever ideas dating back to when she used to live in Los Angeles, California. Her days on The Bold and the Beautiful ended when Wyatt Spencer (Darin Brooks) learned about the criminal efforts employed to split him from Flo Fulton (Katrina Bowden), which was before she officially became a Logan.

Summer and Sally didn’t get off to a good start because of jealousy. Sally believed that Summer was a woman of privilege, which is often the false snip those who are misguided and mean offer.

Lacking confidence in herself Sally targeted Summer, which eventually reeled Tara in. Leiner’s character took advantage of an opportunity and played along with Sally’s scheme, with surface results seeming to be great to-date.

Summer didn’t tell Kyle the full truth about why she suddenly wanted to end their relationship and accept a prestigious position with Marchetti in Milan, Italy. Savvy soap fans know that King’s character made illogical and rapid choices because of her contract status, as Summer’s decisions didn’t match the existing plot.

Kyle is trying to convince himself that Summer may not have seen him as her soul mate. Tara’s pushed presence as his consoler is strategic, but he can’t see that yet due to the intense shade she threw on the love of his life.

The Young And The Restless Leak: Chelsea Turns Adam Against Her In A Most Horrendous Wayhttps://t.co/2H9aVEkBEj

The Young And The Restless Spoilers – Tara Locke Loses It All?

Tara has already lost her husband, as Ashland Locke’s (Richard Burgi) awareness of her connection with Kyle and his reveal as Harrison’s father proved far too much to take. The soon to be legally former Mrs. Locke thinks that she is on the verge of rekindling a relationship that will lead to marriage with Kyle.

Harrison’s mother is believed to have told the truth about his paternity. If true, then Kyle will remain tied to Enriquez’ character forever.

TPTB can take this storyline in many directions. However, Mealor’s pending exit from the cast implies that Tara is going to lose Kyle. It’s teased that he and Summer will reunite in Italy. Whether Tara retains full control over Harrison is yet to be seen.