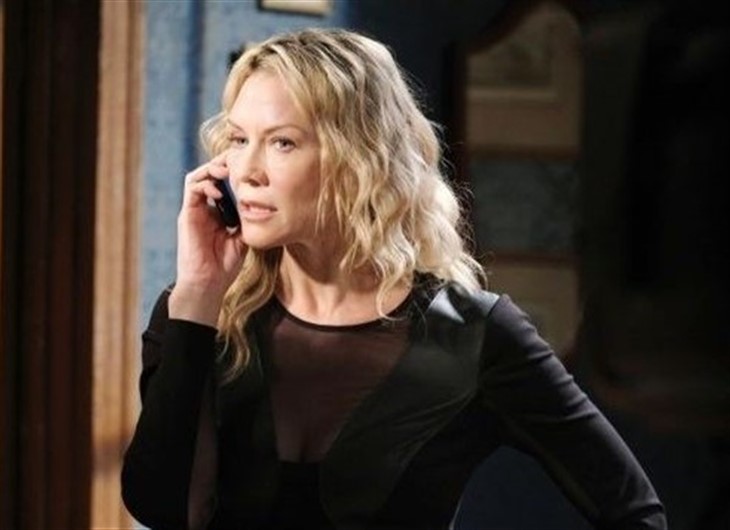 Days of Our Lives (DOOL) spoilers reveal that Eric Brady (Greg Vaughan) comes home just in time for his anniversary. However, Sami DiMera (Alison Sweeney) drops a bomb at the party that ruins the homecoming. Nicole Walker Brady (Arianne Zucker) takes extreme measures to make Sami pay. Unfortunately, her quest for revenge could endanger the lives of innocent people.

DOOL spoilers reveal that Sami will not give up her goal of destroying “Ericole.” She knows that her enemy cheated on Eric with Xander Cook (Paul Telfer). In order to get him to corroborate her story, she makes a tempting offer. It is teased that Xander gets very talkative at the anniversary party, so they must make a deal. Sami must offer something pretty good because Xander will get fired once he exposes Nicole’s secret. It’s not enough that Eric finds out that he’s been betrayed. Sami thinks it’s appropriate to expose the one-night stand at the couple’s anniversary party.

Even though Eric comes home to Salem to be with his wife, he doesn’t plan on staying long. Even before the cheating is revealed, Eric’s homecoming is only for a short time. Apparently, he plans on going right back to the Congo. So, if Nicole thought that she was going to have a real marriage, she is sorely mistaken.

Once Eric finds out the truth about his wife sleeping with Xander, the marriage will be over for good. Plus, Xander will get great enjoyment out of telling Eric all about his night of passion. He will probably spend a great deal of time just rubbing it in Eric’s face.

Days of Our Lives spoilers reveal that Nicole recently came up with an idea on how to deal with Sami. She knows that Kristen DiMera (Stacy Haiduk) hates Sami, especially since Sami and Lucas Horton (Bryan Dattilo) talked to the police. When Sami and Xander blurt out the cheating bombshell, Nicole will explode. Determined to make Sami suffer, she could make a deal with the devil.

Kristen is famous for blaming her problems on other people. She will likely blame losing Brady Black (Eric Martsolf) on Sami. Let’s not forget that Kristen has also lost her daughter, Rachel Black (Josephine and Rosalind May). The villain just might forget about Chloe Lane (Nadia Bjorlin) for the time being and focus all of her hate on Sami.

She was targeting her sister-in-law anyway, but Kristen never does anything for free. She will negotiate with Nicole, especially if she can sense her fury and desperation. Under normal circumstances, Nicole would never risk innocent lives, especially if they are people she cares about. However, this war between the two cheaters is anything but normal. Nicole just might make a deal with the devil and innocent lives could be in danger, including Brady and Chloe.