The Bold And The Beautiful (B&B) Spoilers: Steffy Turns Down Finn’s Proposal, But Why? 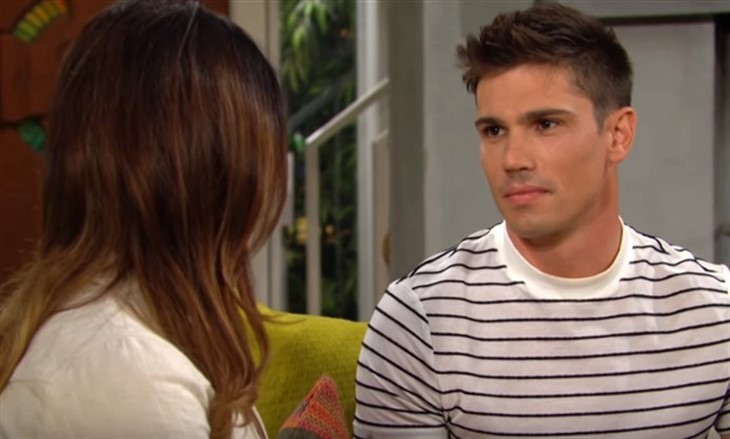 The Bold And The Beautiful spoilers indicate that John “Finn” Finnegan (Tanner Novlan) will want to proceed with his wedding to Steffy Forrester (Jacqueline MacInnes Wood). However, Steffy has other ideas and turns Finn down. Is she breaking things off with Finn?

The Bold And The Beautiful’s Finn loves being with Steffy and their new baby. Finn wants to make this a permanent arrangement as soon as possible. Unfortunately, Steffy will want to wait and Finn misunderstands why. Finn will automatically jump to the conclusion that Steffy wants to hold off because of Liam Spencer (Scott Clifton). After all, Liam has just gotten out of jail after being accused of murder. Finn believes that Steffy still has feelings for Liam because of the history they share and will voice that opinion. However, Finn could not be more wrong, Steffy just wants everyone included in their wedding and that means Finn’s family as well. Will Finn’s family come to town for their wedding?

The Bold And The Beautiful’s Finn hasn’t said much about his family. Up until this point the family really hasn’t been mentioned at all. Now, suddenly, instead of moving forward with the wedding, Steffy wants to meet Finn’s family. Has this suddenly become important because of everything Liam has been through? Is Steffy afraid that Finn’s family has some crazies that she just cannot deal with in it? Does Steffy simply want to meet her intended in-laws before she and Finn get married? More importantly, will Finn’s family come to town to meet his son and his fiance’?

The Bold And The Beautiful Spoilers – Will John Finn Finnegan And Steffy Forrester Get Married At All?

Now that The Bold And The Beautiful’s Steffy has put on the breaks, will she and Finn go through with the wedding at all? Perhaps Steffy is so accustomed to being a single parent that she has changed her mind about the wedding. Could Steffy simply not want to hurt Finn’s feelings by admitting that she is having second thoughts? Maybe Steffy thinks Finn is rushing into marriage just because they have a child together. Has Finn thought about how marriage will change his life? Is Finn so tied up in fatherhood that he isn’t looking at the whole picture?

Finn is loved by Steffy’s whole family, however, he and Liam have had their differences. Is Steffy afraid that the two men will clash over the children? Is Finn right to believe that Steffy still has feelings for Liam after all?