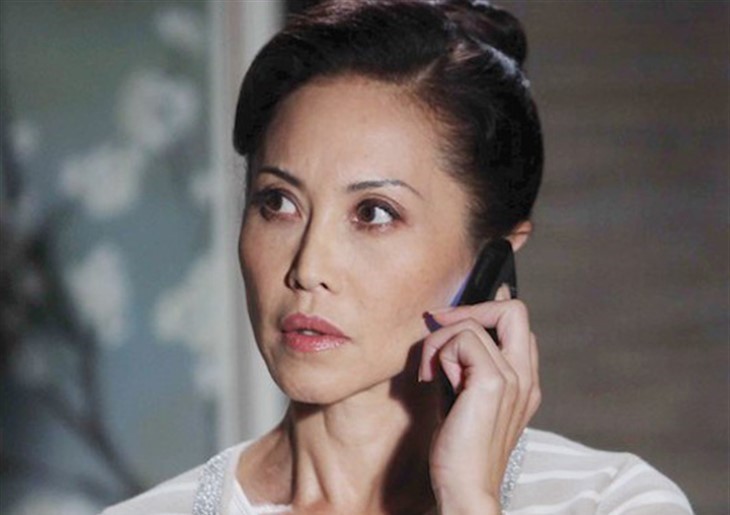 The Bold and Beautiful spoilers tease that Naomi Matsuda will begin appearing on The Bold and The Beautiful on August 2, as Li Finnegan, the mother of Dr. John “Finn” Finnegan (Tanner Novlan).

The Bold And The Beautiful Spoilers – Dr. John Finnegan’s Parents Arrive To Meet Their New Grandson

Viewers of The Bold and The Beautiful will recall that Finn and Steffy Forrester (Jacqueline Macinnes Wood) recently gave birth to their son, Hayes Forrester Finnegan (Samantha Worden) and the happy paternal grandparents will soon be appearing to meet him.

Ted King , formerly Lorenzo and Luis Alcazar on General Hospital and Tomas Delgado on One Life To Live, will play Jack Finnegan, Finn’s father. He will arrive a little bit ahead of his wife Li, who starts on August 2nd. For Naomi’s part, she shares with Soap Opera Digest that she is very excited and grateful to be chosen for the role of Li Finnegan.

She speaks highly of King, who she said helped her calm her nerves the first day in her new role. Naomi describes the atmosphere at The Bold and The Beautiful as a tight family, and she was just a little nervous about whether she would fit in or not. She called King a pro, inviting and welcoming in spite of the fact that he is a newcomer to The Bold and Beautiful world himself. She thanks him for making her first day on set easier than she had ever expected. She previously appeared on Days of Our Lives for twelve episodes in 2015 as Tori Narita, the mother of Paul Narita (Christopher Sean) and in several other television series.

While show runners at The Bold and The Beautiful has not released what Jack Finnegan’s profession is, nor Ted King in his interview in the previous issue of Soap Opera Digest, Naomi shares that Li Finnegan is a surgeon, which may be where Finn got his love for practicing medicine. She describes her character as having grown up on the East Coast, and being busy with her career. She had never really thought about having children until later in life, but she is very dedicated to both her career and to her son.

Naomi likes to think that Li thinks Finn’s love of medicine may have been inspired by her. She will likely be a doting grandmother to her new little grandson, as well! Longtime viewers of The Bold and The Beautiful will recall that Steffy’s mother is also in the medical field. Taylor Hayes (Hunter Tylo) is a psychiatrist with a busy practice.

As far as the actress herself, Naomi was born in Nagasaki, Japan but moved to San Diego, California with her mother and her brother at the tender age of five. She has been a performer her whole life, booking her first acting role in 1997 and working steadily in the business ever since. She also trained in traditional Japanese dance starting at the age of seven and learned jazz dancing and ballet at age thirteen.