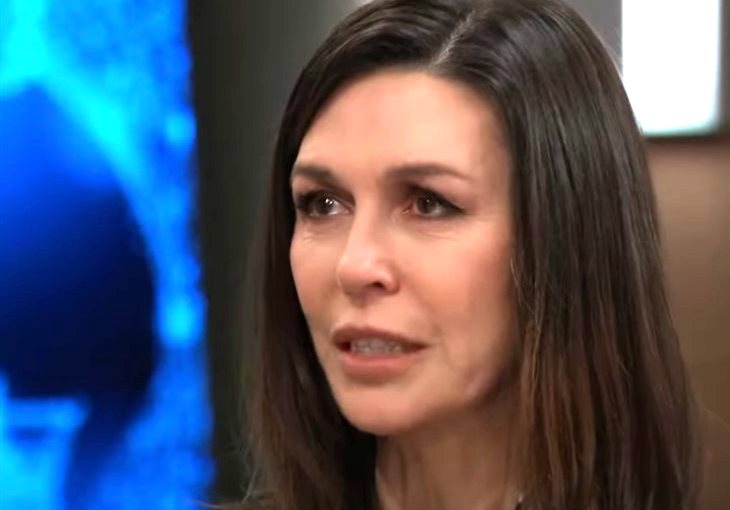 General Hospital spoilers tease that Anna Devane (Finola Hughes) will be shocked to realize who might have been on the roof with Peter August (Wes Ramsey) the day he disappeared, after returning with Valentin Cassadine (James Patrick Stuart) to Port Charles after speaking to the pilot, David Hopkins (as yet unnamed actor).

General Hospital viewers will recall that Anna and Valentin went to New York City to see if he could provide any information about how Peter had disappeared, but Hopkins didn’t land to pick him up – he had kept telling Peter that the conditions weren’t right for him to safely land. However, they do find out that he is the brother of the fake nurse that Peter hired to kidnap Maxie Jones (Kirsten Storms) and her baby.

He doesn’t come right out and say it, of course, but he mentions his sister disappeared with her baby near Pautuck, New York and they know her real name was Marie Hopkins (Kimberly J. Brown)!

It actually doesn’t take two WSB trained spies to make that connection! Hopkins does provide Anna and Valentin with some information that is usable, however. He tells Anna that there were two men fighting on the roof and describes them – although of course he admits nothing about having been there to pick up Peter! Valentin and Anna find that David Hopkins really isn’t a very good liar, and Valentin tells on himself regarding his feelings for Anna when he overreacts to David flirting with Anna and attacks him!

However, this may scare a few more details about the day Peter disappeared out of him! General Hospital viewers will recall that Anna had cautioned Valentin that she could get more information if she was alone, although she consented to Valentin coming along and observing from a distance.

General Hospital viewers can imagine Anna’s shock as she realizes who the other man on the roof with Peter was! Anna had talked briefly and not all that often with her ex-fiancé Dr. Hamilton Finn (Michael Easton) recently. The focus had all been on Harrison Chase’s (Josh Swickard) recovery from the toxin that he had accidentally ingested at a family dinner party, thanks to Peter.

As General Hospital viewers will recall, Finn had been Peter’s true target, but thanks to a family game of spinning a lazy susan with cups of coffee around kind of like spinning the bottle, Chase got the poisoned coffee instead of Finn!

Finn had been radio silent about his having seen Peter on the roof that day, and of course that raises Anna’s suspicions. Anna recalls that she had gone to Finn that day when she found out Peter had sold “The Invader” and was vacating his office, and Chase had needed more antidote. Finn had intended to get it from him when he wouldn’t give it to Anna. Anna knows that she must confront her ex-fiancé about why he hasn’t been forthcoming with her when it comes to his encounter with Peter on the roof.

She can certainly understand a delay, as he was so focused in on saving his brother. But now Anna must start an investigation, and talks to Finn about what happened up there that day. Finn will confirm her suspicions, but will he confess all? There are others who will be harmed if he goes to prison – Violet Finn (Jophielle Love) for one, and Nurse Elizabeth Baldwin (Rebecca Herbst) for another! Time will tell if he tells all or only a part of the story!