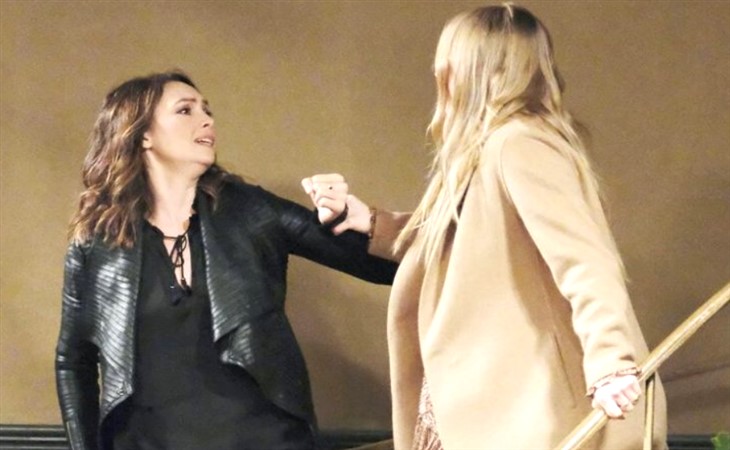 Days of Our Lives (DOOL) spoilers tease that Abigail DiMera (Marci Miller) will return to Salem with a vengeance, and that vengeance will be directed straight at her scheming half-sister Gwen Rizchech (Emily O’Brien) in future Days of Our Lives episodes. No doubt Gwen has heard some stories about “Hurricane Sami” DiMera (Alison Sweeney), just wait till Hurricane Abigail blows back into town!

Days Of Our Lives Spoilers – Estates Can Take A Long Time To Settle, But Abigail DiMera Can Still Return

Days of Our Lives viewers will recall that after Laura Horton (Jaime Lyn Bauer) died, which Abigail had continued to blame Gwen for, Jennifer Deveraux (most recently Cady McClain) had gone out of town to settle her estate.

She’s been staying with her brother Mike Horton (Roark Critchlow) and when Abigail left town, she went to stay with her mother and Uncle Mike for a while. Days of Our Lives viewers will recall that Abigail was seething with hatred towards her half-sister and blamed her not only for the death of her grandmother, but has likely been feeling guilt about their little dance on that staircase that she thinks caused Gwen’s miscarriage.

Gwen had come clean to their father, Jack Deveraux (Matthew Ashford) about the fall down the stairs being an all too unfortunate accident – but never came clean about the timing of her miscarriage, which was before the fall. That means Abby may be on a guilt trip about Gwen and Chad DiMera’s (Billy Flynn) baby being lost in the miscarriage. Abigail knows she didn’t push Gwen down the stairs, but then there is the fact that if they hadn’t been fighting at the top of the stairs in the first place, Gwen may never have fallen. Now, Jennifer may still have to stay with Mike for a while to get the estate settled, which can take several months, but that doesn’t mean Abigail cannot return home.

Then, he wound up coming to harass Gwen at the wrong time – when Xander Cook (Paul Telfer) was there; Xander didn’t kill him, and neither did Gwen, but Xander apparently literally scared Snyder to death with that knife to his neck! But Julie Williams (Susan Seaforth Hayes) struck again – and found a “passed out” Snyder on her family heirloom couch, and gave Xander and Gwen down the road about it.

Later, when his body surfaced at a lake and the story got on the news, she recognized him and now there’s a death investigation. This death investigation may bring out the truth that Gwen was being blackmailed, and when autopsy results are complete, they may show the heart attack caused his death. But as secrets have a way of coming out, Gwen herself may have to tell the whole truth to clear herself of suspicion, and Xander may have contributed to Snyder’s having a fatal heart attack but he didn’t kill him.

But if Gwen has to confess about being blackmailed and the reason for it, then Abigail will probably hear about it! Gwen will have to deal with both her father and her half-sister, and with Abigail having a several month guilt trip over something she didn’t do, she’s going to be furious!