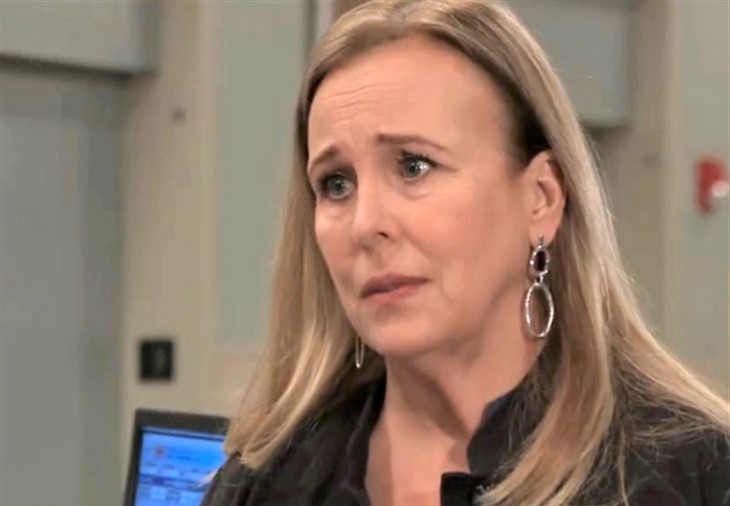 General Hospital spoilers indicate that the truth is about to come out that Nikolas Cassadine (Marcus Coloma) is behind Hayden Barnes (ex-Rebecca Budig) shooting years ago. How will Laura Collins (Genie Frances) react when the truth comes out?

General Hospital’s Sam McCall (Kelly Monaco) and Shawn Butler (Sean Blakemore) are both determined to find out what happened the day Hayden was shot. Hayden visited Shawn and told him there could have been another shooter years ago. Sam offered to help Shawn prove his innocence as well. However, Shawn now has a chance to investigate things himself and Nik is number one on his list.

After all, Nik chose to marry Hayden and that set off plenty of red flags. People also know that Nik is behind Hayden’s latest disappearance and that also leads to more suspicion of him as well. How long can Nik keep this guilt a secret? Will the truth about Hayden’s shooting finally bring Nik to justice? Nik has vowed to keep Shawn from uncovering the truth, how far will he go to keep that promise?

General Hospital’s Laura was furious with Nik when he came back to Port Charles after faking his death. Nik let his entire family grieve for three years before he decided to reveal himself. Laura could not believe that money was so important to her son. Now Laura is about to learn the extent of Nik’s greed. Nik already tried to keep Jason Morgan (Steve Burton) from his family when he thought Andrew Cain (ex-Billy Miller) was Jason. Laura stood by and kept that secret even when Nik married Hayden. However, murder is a different ballgame and Laura isn’t likely to take this very well. Will Laura wash her hands of Nikolas when the truth comes out?

General Hospital’s Nikolas has proven time and again in the past that he was a true Cassadine. Nik had no qualms about killing Hayden when he wanted those diamonds back. Nik stole ELQ from the Quartermaines as well. However, Laura had thought that Ava Cassidine’s (Maura West) love had changed him. Laura will be stunned to learn the extent of her son’s greed. Can Laura get past Nik’s actions after learning that he not only ran Violet’s mother off but is also responsible for the shooting that almost killed her?

Nik has also let Shawn sit in prison for years for a crime he didn’t commit. Will Laura wash her hands of her oldest son to try to get through to him?