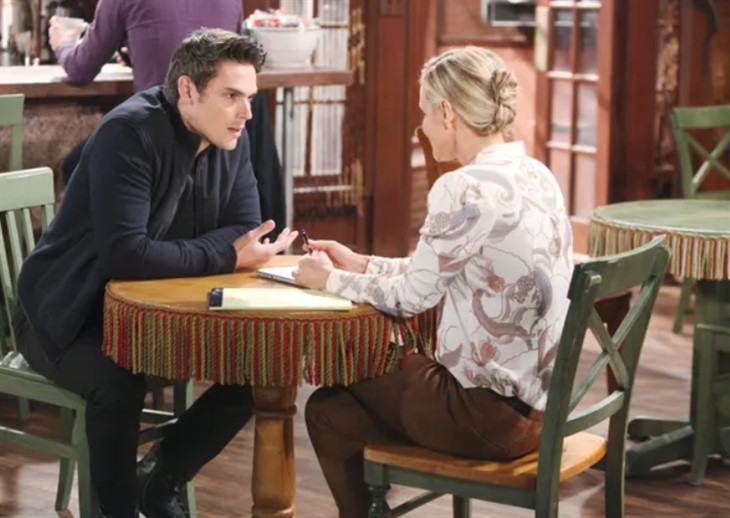 The Young and the Restless (Y&R) spoilers document that Adam Newman (Mark Grossman) and Sharon Newman (Sharon Case) had concurrent thoughts about their recent, shared pasts. Might the extended retrospectives imply that Shadam will reconcile in the near future?

Chelsea Lawson (Melissa Claire Egan) and Rey Rosales (Jordi Vilasuso) are away in Minnesota. She and Connor Newman (Judah Mackey) are visiting with Anita Lawson (Catherine Bach), who is said to be recovering from hip replacement surgery. That convenient development was written into the show in order to push Chelsea and Rey out of Genoa City, Wisconsin, at the same time.

The Young And The Restless Spoilers – Shey Is A Good Couple

Rey provides Sharon with stability. He’s a good guy and is nothing like Adam the bad guy. However, as Nikki Newman (Melody Thomas Scott) was saying, Adam is clearly demonstrating that he wants to be a better man and is making progress.

Sharon is proud of Adam’s personal advancement. She also continues to feel the connection to her former husband. Her current spouse is someone that Sharon loves, but he’s not Adam.

Shey’s history is thin and the tension that’s often existed between them has mostly been centered on Rey’s recognition of Sharon’s existing feelings for Adam. So, the setup is clear with both Vilasuso and Egan’s characters being away.

Adam and Chelsea did love each other. They aren’t in love now, however.

There is no doubt that both people want the best for their son, Connor. Adam’s decision, to insist that Connor be able to go with his mother to Minnesota, was another step in Adam’s push for redemption.

While Chadam could always make a comeback someday, this pairing isn’t active as July 2021. So, might Shadam, which hasn’t officially existed since 2010, supplant it and Shey?

The Young And The Restless Spoilers: Victoria Fears The Worst When An Unexpected Attack Occurs #YR #YoungandRestlesshttps://t.co/hl6WK3ZmVM

The Young And The Restless Spoilers – Time To Fulfill Fan Tease

Fans of Adam and Sharon have been longing for a Shadam reunion for years. There was a brief moment in the recent past, during the period when Adam wasn’t with Chelsea and Sharon and Rey hadn’t yet married, where Grossman and Case’s characters romantically reconnected at the penthouse. But other than that, it’s been all flirtation and resistance.

Chadam doesn’t exist. So, that’s not an issue. Sharon owes it to Rey to end their marriage, if she wants to be with Adam. Here’s hoping that she either doesn’t give into Adam while Shey exists or tells Rey that Shadam is her future.