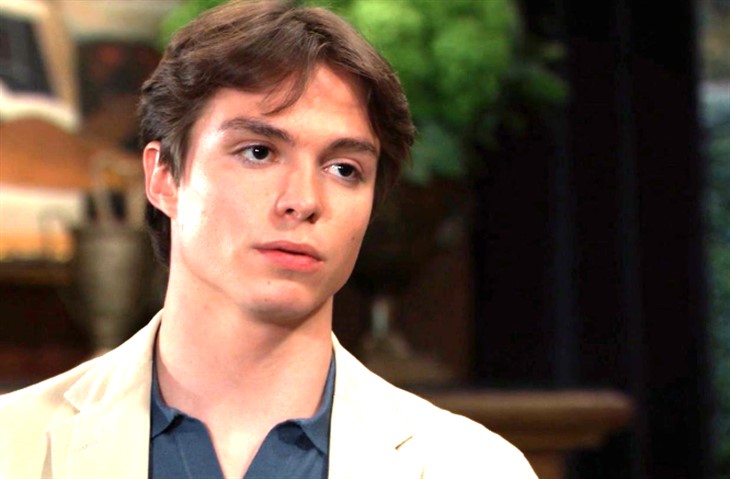 General Hospital (GH) spoilers tease that Spencer Cassadine (Nicholas Chavez) has finally made peace with his father, Nikolas Cassadine (Marcus Coloma). Spencer has had every reason to be angry with Nikolas since he let Spencer believe he was dead for three years while he pursued his vengeance against Valentin Cassadine (James Patrick Stuart). To make matters worse, Nikolas also married Ava Jerome (Maura West).

As viewers know, Ava witnessed Valentin shoot Nikolas, causing Nikolas to fall into the icy waters below. Ava had agreed to testify against Valentin, but changed her mind after Valentin had promised to have the scar on her face removed. Without Ava’s testimony, Spencer lost the Cassadine empire to Valentin. So Spencer took matters into his own hands once he found out that Ava and Nikolas were married and in love.

General Hospital Spoilers – Spencer Cassadine will need someone to confide in!

Since the Stalker case is an active police investigation, Spencer has to be very careful not to be found out. But he may turn to one of his father’s exes, Dr. Britt Westbourne (Kelly Thiebaud), to confide in. Britt and Spencer became very close when she was with Nikolas, and remained so even after the break-up. Both of them are most certainly schemers, and both snobs of sorts. But Britt has changed quite a bit since she last encountered Spencer, and the advise she gives may be what he expected. Britt will likely tell Spencer to tell his dad what he did, if not Ava or the police.

If the police end up closing in on Spencer, he may have to confess to Nikolas in the hopes that Nikolas can use his wealth and influence to steer the investigation into another direction. Nikolas will be beyond furious at his son, but will have to admit that he is partially to blame as well. If he hadn’t let Spencer believe he was dead for three years, none of this may have happened. Nikolas won’t want Ava to discover the truth either. But of course Ava will find out eventually, and may just leave Nikolas for good.

Should Spencer confide in Britt about his actions as the Stalker? Will she convince the young man to tell Nikolas? And if so, what will Nikolas do about it? Could this be the final straw in Nikolas and Ava’s relationship? Money and power can sometimes overrule matters of the heart in Port Charles, so stay tuned to General Hospital airing weekdays on ABC.

And don’t forget to check back right here regularly for all your General Hospital news, information and spoilers!