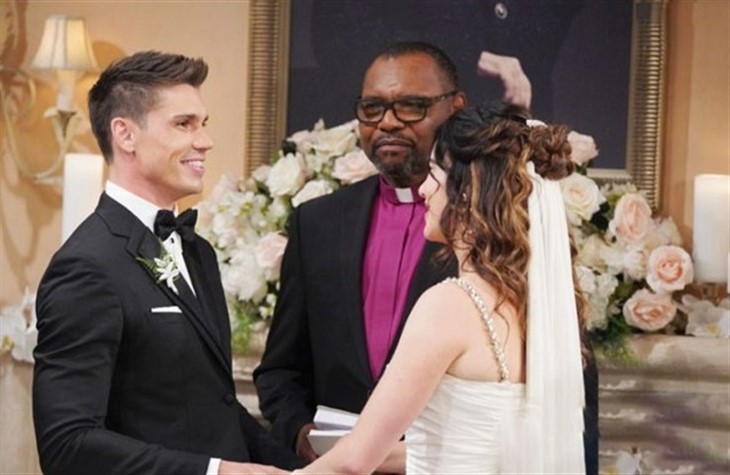 The Bold and the Beautiful spoilers document that Steffy Forrester (Jacqueline MacInnes Wood) and John Finn Finnegan (Tanner Novlan) are getting married this week. The nuptials are anticipated and the setting is familiar in the Forrester mansion’s living room. But there is a new face in the officiant’s role.

Carter Walton (Lawrence Saint-Victor) presided over a number of marriages and re-marriages through the years. While Eric Forrester (John McCook) has momentarily maintained his friendship and business tie to Saint-Victor’s character, Carter is not involved in these eagerly anticipated nuptials.

The casting of a reality television personality in the Sinn wedding officiant role is both surprising and welcomed on B&B.

The Bold And The Beautiful Spoilers – Disorder In The Court

The Three Stooges aren’t an expected reference point when writing about The Bold and the Beautiful. But Disorder in the Court is worth mentioning.

Moe Howard, Larry Fine, and Curly Howard represent one of the greatest comedy teams of all-time, for those who don’t take life or themselves too seriously. All soap opera viewers value escapist entertainment and can make the connection between the famous courtroom setting where The Boys performed in their 1936 short and the upcoming wedding scenes.

Petri Hawkins Byrd (Officiant) has helped to maintain order in Judge Judy’s TV courtroom since the mid-1990’s. Now, he’s set to play the officiant at the Sinn wedding. That is a cool blending of two great daytime staples, a soap and a courtroom show. Kudos to B&B for this guest star casting.

Steffy was unsure if marrying Finn at this point in time was best. Their love isn’t in doubt, as Hayes Forrester Finnegan’s (no baby actor’s name known for this role) existence confirms.

Sinn became a projected power couple around this time last summer. Devoted fans of this couple felt the same spark that Steffy and Finn did the instant they saw each other in the hospital room.

The path from then to now has been filled with great acting, feel-good storylines, and an arrival at this point in daytime. A B&B summer wedding, now that’s terrific soap.

The Bold And The Beautiful Spoilers – Bailiff Might Be Needed

Byrd, as Judge Judy Sheindlin fondly refers to her longtime bailiff and friend, might need to be contacted after the Sinn wedding plays out. Teasers indicate that day-of-the-event drama will take place.

Steffy won’t leave Finn waiting at the altar. Finn won’t get cold feet. Instead, viewers are expecting some type of parental-based conflict. Finn’s family is just debuting. So, Steffy’s family ties might bind while the famous guest star in the officiant role presides.