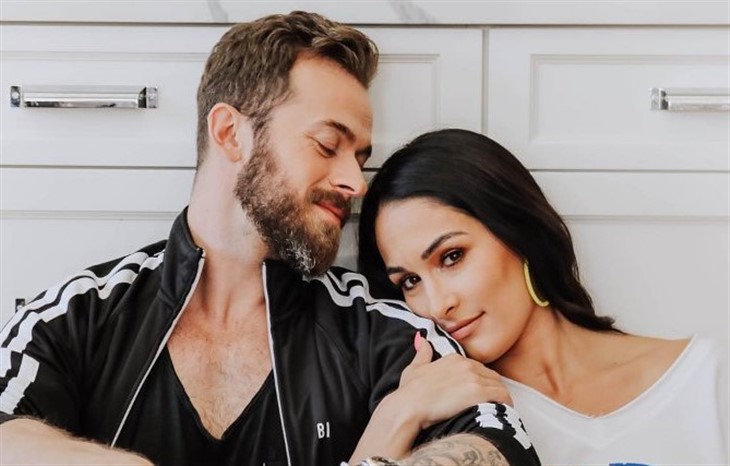 Dancing With the Stars pro dancer and champ Artem Chigvintsev and his fiance Nikki Bella welcomed Matteo last year. You might recall that Nikki and her twin sister both fell pregnant at the same same time. Actually, their babies arrived within a day of each of other. Well, now he’s a one-year-old and some cute photos emerged on Instagram.

Artem Chigvintsev is absolutely one of the most favorite dancers on the show. Of course, if he never had an opportunity to dance, he’d not be a household name amongst fans. Fortunately, he did. Actually, at one stage, he stepped up in support of Prince George in UK. The sweet little boy really loves learning ballet, but the media mocked him for it. Well, Artem’s dancing excellence led him to an Emmy Nomination.

Dancing With the Stars Season 29 was a particularly good season. However, probably the best thing that ever happened to him was the arrival of his son Matteo Chigvintsev. Planned for, Nikki Bella and his dad couldn’t feel prouder or more love for their child, it seems. While they haven’t tied the knot yet, that event probably comes along eventually. However, they lead busy lives, and Season 30 approaches.

Artem Chigvintsev and Nikki posted up four adorable photos of their baby boy on his first birthday. The post came on July 31, and the caption read, “Happy first birthday Matteo, Mama and Dada loves you so so much.” One photo revealed Matteo sitting in front of his giant birthday cake.

Another photo of the Dancing With the Stars dancer’s little boy, showed him getting frosting on himself. Then. along came a photo of him dressed in a tiger-striped onesie with his mom. In the final photo, dad also entered the picture. Many reality TV stars and castmates responded in the comments. Kaitlyn Bristowe commented, “1 year!!!!!!! Wow!!!!! Happy birthday sweet boy!!!!!

Dancing With The Stars – Other Fans And Followers Comment On Matteo

Here’s a sample of other comments that arrived:

Happy Birthday sweet Matteo! So hard to believe you’re already a whole year old! Can’t wait to see what the next year has in store for you guys ❤️❤️.

Already!!!! No way! Time for another one 😉you make cute babies for sure!”

Remember to check back with us often for more news and updates about the cast of ABC’s Dancing With the Stars.