Days Of Our Lives (DOOL) Spoilers: Jack Ignores Everyone and Helps Xander And Gwen 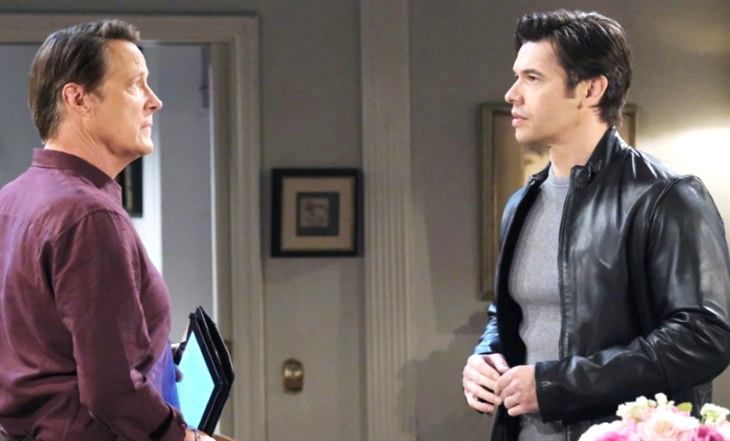 Days of Our Lives (DOOL) spoilers and updates tease Jack Deveraux (Matthew Ashford) will want to help two people that he cares about. Jack has become friends to Xander Kiriakis (Paul Telfer). Xander considered Jack to be his mate. Jack has started to get close to his daughter Gwen Rizczech (Emily O’Brien). Many in Salem are concerned about Jack wanting to have a relationship with Xander and Gwen because they both have a bad reputation.

Steve Johnson (Stephen Nichols) and Dr. Kayla Brady (Mary Beth Evans) have expressed their concerns to Jack about Xander and Gwen. However, Jack has not always had a good reputation in the past. Jack had Jennifer Horton Deveraux (Cady McClain) who believed in him when many did not believe in him. Jack does not know that Xander and Gwen could get into trouble with the law.

Days Of Our Lives – Gwen Rizczech Has Trouble With Dr. Clay Snyder

Gwen wants to keep the secret about when she lost her baby. Gwen lost her baby before she and her sister Abigail Deveraux-DiMera (Marci Miller) got into a fight. Abigail left Salem after the fight. Dr. Clay Snyder (Michael Lowry) knew about her secret and wanted to get Gwen to help him with his illegal pharmaceutical drug ring. Gwen agreed to help Dr. Snyder because she wants to get to be in Jack’s life.

Dr. Snyder wanted Gwen to deliver drugs for him but Gwen did not want to help him. Xander found Dr. Snyder threatening Gwen. Xander threatened Dr. Snyder who died of a heart attack. Xander and Gwen have been able to keep the secret from anyone from finding out how Dr. Snyder died. However, they may have trouble from Julie Olson Williams (Susan Seaforth Hayes) because she saw Dr. Snyder. Julie believed that he was passed out from being drunk and not dead.

Xander wanted to protect Gwen. He did not want Jack’s daughter to be in trouble from Dr. Snyder. Julie has figured out that Dr. Snyder was dead and not passed out. She went to Eli Grant (Lamon Archey) to have him arrest Xander. Eli arrested Xander who was bailed out by Sami Brady DiMera (Alison Sweeney). Sami wanted Xander to tell her twin brother Eric Brady (Greg Vaughan) that his wife Nicole Walker Brady (Arianne Zucker) had a one-night stand with Xander. Xander agreed to help Sami in exchange for his freedom and money.

Days Of Our Lives Comings And Goings: Kyle Lowder Fires Up The Rumor Mill Over His Returnhttps://t.co/q537csmGmW

Jack knows that it can be difficult to find forgiveness because he has done some questionable things in his past. Jack may still want to help Gwen If she gets into trouble because of Snyder. Can Jack help Gwen? Jack believes that Xander deserves to have a chance to prove himself in the eyes of the people of Salem. Will Jack be impressed with Xander for trying to save Gwen? Jack will need to help Gwen and Xander when the truth about how Dr. Snyder died comes out.