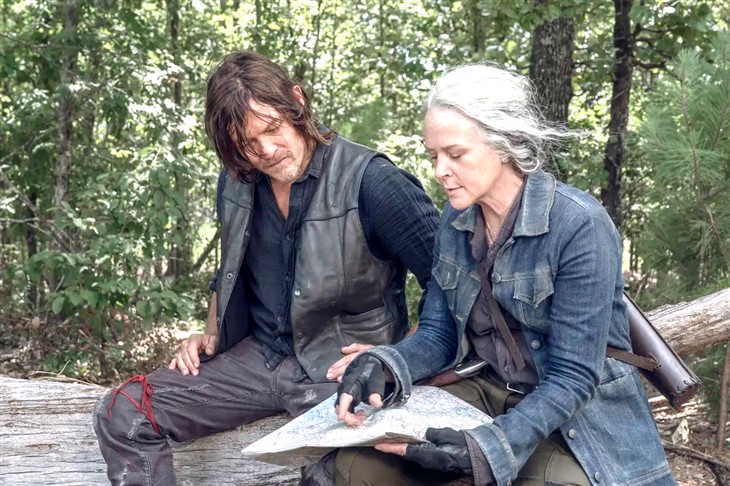 The Walking Dead universe just expanded. With a spinoff in the works, fans want to know just how the new show will build on some familiar characters.

And as rumors about AMC’s Daryl & Carol spinoff swirl, the Walking Dead showrunner Angela Kang dishes up some answers we’ve been wanting.

Find out what you need to know about this promising new show below.

Reflecting on her Daryl & Carol spin-off,  The Walking Dead  showrunner Angela Kang offered some clues to what fans can expect.

But don’t look for the title to reveal any hints! Kang and her crew have not yet titled the spin-off. Thus far, the team uses only a simple working title of Daryl & Carol for the show, reports Comic Book.

Thus far, Kang has shared that a plan exists to provide a transition bridge for Daryl Dixon, portrayed by Norman Reedus, and Melissa McBridge, played by Carol Peletier.

The sequel series even received an initial premiere date of 2023.

AMC Networks recently made two announcements about the Walking Dead.

Last September, AMC unveiled an expansion for the final season of The Walking Dead. In addition, the network discussed the fourth series for the Walking Dead Universe.

Kang, who has been on board the series since Season 2, is set to work as showrunner.

With her experience on The Walking Dead beginning in 2011, Kang knows how to sketch out transitions. She visualizes the new series as providing the final part of a bridge beginning with season 11 of The Walking Dead.

“I think so,” confirmed the showrunner about the transition plan. “We’ve definitely talked about how we think we land them and where they kind of tip-off to.”

As to what is known, Kang added that the group has “pitched out what we think is the pilot, and it’s all in development, which is on its own schedule.”

But although The Walking Dead spinoff showrunner has created a plan, she cautioned not to expect any major spoilers.

“Things are still in the process of being broken by beats and written and all of that, but we at least have a plan which hopefully will work out,” added Kang.

Thus far, the pilot itself remains a work in progress, with the showrunner teaming up to write with Gimple.

Scott actually held the role as The Walking Dead showrunner just before Kang, making the transition smooth. And it was Gimple who first announced plans to make the Daryl & Carol spin-off noticeably different than the original zombie show.

“With Daryl & Carol, I can’t say too much about it, but I will say it’s going to be very different from The Walking Dead, going to have a different tone,” Gimple clarified.

He promised that viewers will detect “a different mission churning under it” with regard to the spin-off. And look for more than just Carol and Daryl.

Gimple and Kang are working on building out “characters all around Carol and Daryl.”

While The Walking Dead has become famous for its darkness and brutality, Kang promised a “lighter” tone for the spin-off.

“Not in a way that feels frivolous, but I think like all of us are looking to have fun in that world,” pointed out Kang. “It’s a road show — I hope I can say that — and so I think it will feel distinct. It’s definitely something that Norman and Melissa and I and Scott have all talked about, what we crave tonally.”

Be sure to check back here for all your news about The Walking Dead and the untitled Daryl & Carol spin-off!