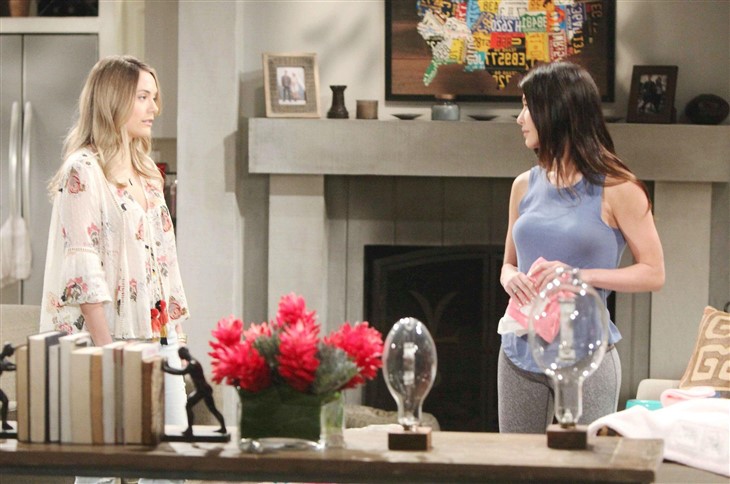 The Bold and the Beautiful (B&B) spoilers document that Steffy Forrester (Jacqueline MacInnes Wood) is about to officially complete her transfer from the Steam roller coaster to the new Sinn reality. Marrying John Finn Finnegan (Tanner Novlan) is a watershed moment in the arc of Wood’s character, no doubt.

Meanwhile, Hope Spencer (Annika Noelle) is putting the pieces of her family back together after Liam Spencer’s (Scott Clifton) stay in jail. While Vincent Walker (Joe LoCicero) framed Liam, as part of a delusional and unwanted attempt to help Thomas Forrester (Matthew Atkinson), Liam did enable a weird cover-up scheme that his father concocted.

While it wouldn’t exactly be accurate to say that Finn is a selfless soul and Liam is a mess. It’s also not that far off the daytime mark.

The Bold And The Beautiful Spoilers – Steam Became A Bad Loop

Steffy got to the point where she made herself depressed. Wood’s character was so in love with Liam that she felt abandoned when he returned to Hope for what seemed like the millionth time.

The addiction storyline that was coupled with the former and current couple’s triangle helped Wood to earn a Daytime Emmy award. The statue was her second honor.

Liam and Finn did team to help Steffy overcome her just-started misuse of prescription medication. But Finn took hold as the man in Steffy’s life, which included his recognition and response to Liam’s weighty influence.

No one can honestly claim that Liam and Hope don’t love each other. The infamous steal of their daughter, Beth Spencer (Madeline Valdez and River Davidson), at birth enabled a permanent backstory event for this duo.

Hope and Liam share what can be light-heartedly asserted as a similarly goofy personality type. They are idealists. Of course the eternal flaw in their philosophy is a failure to appreciate reality. Soapy alternatives are invented to address whatever problems supposedly exist within their families or the portion of Los Angeles, California, in which they live their lives.

Nevertheless, Lope actually means well. They do believe that they are often right as well, with stubbornness being another shared trait.

B&B made a smart move by inventing a new soul mate for Steffy. Doing so allowed the creative team to develop someone who matches Wood’s alter ego, while also allowing one of the show’s lead actors to explore new aspects of her longtime character.

Here’s hoping that TPTB also provide Noelle with some new plot paths to walk on. She and her cited cast mates are great actors. Noelle has the chops to deliver previously unseen results, as the Hope mannequin storyline demonstrated.

Liam doesn’t need to become more like Finn. Instead, Clifton’s character and Noelle’s are ready for fresh adventures.