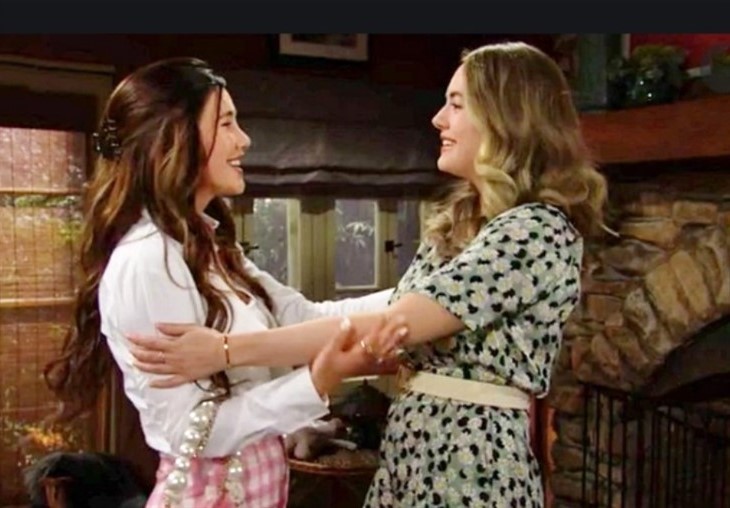 The Bold and the Beautiful spoilers document that Steffy Forrester (Jacqueline MacInnes Wood) made a wise move. Some would rightly call it bold. What was also beautiful is that Steffy wants to bury the hatchet with Hope Spencer (Annika Noelle) as part of the Sinn nuptials. So Hope’s acceptance of the Matron of Honor title was solid.

It makes total sense that Steffy has no feelings of bitterness toward Hope. It goes along with the Sinn arc developing so nicely since last summer.

Whether John Finn Finnegan (Tanner Novlan) and Liam Spencer (Scott Clifton) can do more than behave respectfully toward each other remains to be seen on B&B.

The Bold And The Beautiful Spoilers – Time Allows Circumstances To Change

Steffy and Hope were bitter rivals for many years. Their animus was fully centered on the battle for Liam.

As Finn was telling his parents, Steffy couldn’t depend on Clifton’s character. That was because of his split feelings between both ladies.

The Steam and Lope pairings were destined to repeatedly clash as long as Steffy or Hope was with Liam and the other lady was not with someone else. Thomas Forrester (Matthew Atkinson) was never someone Hope loved. However, Steffy found a new man and with Finn, Sinn has fully formed.

Steffy and Hope share commonalities. One point includes their motherhood status. That, along with Hope’s acceptance of Steffy’s ask to be her Matron of Honor implies that Wood and Noelle’s characters can sustain an indefinite period of peace.

So, Steffy has come to view Lope as a positive pairing. Until Finn came along, Liam being with Hope set Steffy off.

The Bold And The Beautiful Spoilers: Grandma Sheila Carter Worms Her Way Into Sinn’s Wedding?https://t.co/5Lc0uO4AnT

The Bold And The Beautiful Spoilers – But Guys Are Different

Finn respects the fact that Liam is fully involved in Kelly’s life. These two particular guys will probably be okay with each other as long Liam respects the boundary lines that Finn set.

After the Sinn wedding and with the passage of time in Los Angeles, California, Steffy and Hope can find ways to potentially allow their husbands to learn not only how to get along, but maybe to become friends as well. That’s a lot to wish for, yet this is daytime where anything is possible.