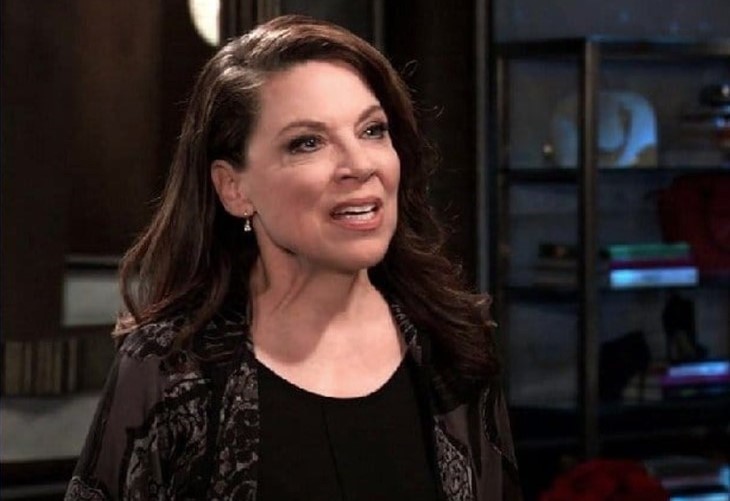 General Hospital (GH) spoilers and updates tease Dr. Liesl Obrecht (Kathleen Gati) is going to be embracing her future. Liesl has a complex past. She was devoted to Cesar Faison (Anders Hove) but he only wanted Anna Devane (Finola Hughes).

She faced the loss of her son Nathan West (Ryan Paevey) and could face losing her daughter Dr. Britt Westborne (Kelly Thiebaud). Liesl has been able to put her dark past in the past and find a new path to a better future for herself. However, Liesl will want to make sure that others in her life find a way have a good future.

Liesl has gotten close to Anna because of their problems with Peter August (Wes Ramsey). Liesl saw Anna as her rival for Faison in the past. However, Liesl does not want to have anything to do with Faison because he killed Nathan. Liesl is concerned about Maxie Jones (Kirsten Storms) who was engaged to Peter.

Liesl and Peter have a bad history because she kidnapped him. Currently Peter is missing and is wanted for different crimes. Liesl will want to find him and learn more about Peter. She will want to help Anna and Maxie to know if they will want to have Peter in their lives.

Liesl has gotten into a relationship with Scott Baldwin (Kin Shriner). Liesl and Scott started to get close because they both loved Franco Baldwin (Roger Howarth). Liesl and Scott were brought together when Scott brought Franco to get help from Dr. Warren Kirk (Jamison Jones). Scott accidently killed Dr. Kirk who was trying to hurt Liesl. Liesl was grateful to Scott for saving her.

Recently, Scott and Liesl have gotten closer after Franco died. Liesl has made an unexpected connection to Scott. She was not treated well by Faison and has found that Scott is a good man who wants to be with only her. Liesl may hope to convince Scott to make a long-term commitment to their relationship.

Liesl is determined to help Britt. Liesl is worried about Britt because she has inherited the marker for Huntington’s disease from her father Faison. Britt does not know when she might fall victim to the disease.

She is determined to live her life to the fullest. Liesl will want to help Britt to face her disease. She will want Britt to have what she wants in her life. Liesl knows that Britt has fallen in love with Jason Morgan (Steve Burton). Britt is upset that Jason is going to get married to Carly Corinthos (Laura Wright). Liesl may try to find a way to get Britt and Jason together.

General Hospital Liesl did not expect to find a bright future when she had a dark past. She has started to get close to Anna. Could Liesl and Anna become friends in the future? Liesl wants what is best for Maxie. Can Liesl find a way to protect Maxie? Liesl will want to know the whole truth about Peter. What will Liesl find when she looks to find out more about Peter?

Liesl wants to have a long relationship with Scott. Will Scott surprise Liesl by wanting to have a long future with her? Could Scott ask Liesl to marry him? Liesl will want Britt to be happy in despite her disease. Will Liesl find a way to help Britt to have what she wants in her life?