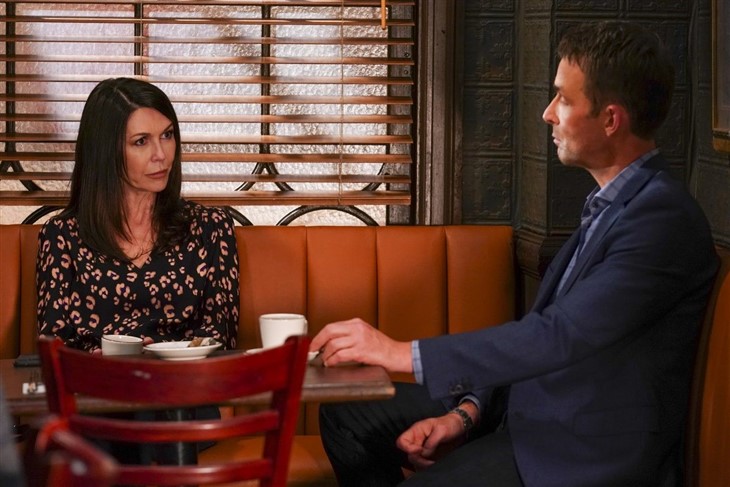 General Hospital (GH) spoilers reveal the incendiary news that the real Nurse Chloe Jennings is alive and unwell as she has a brain injury, but that’s better than the alternative. Explosive show spoilers reveal that crime fighting duo Valentin Cassadine (James Patrick Stuart) and Anna Devane (Finola Hughes) find the lovely lady and grill her like a sausage. Does she have any secrets to spill about this ongoing mystery? She is a nurse after all, could she be the one in possession of Peter August’s (Wes Ramsey) body, nursing him back to health? Now that would be ironic, wouldn’t it?

Nefarious and maybe dead Peter hired Marie Hopkins (Kimberly J. Brown) to pretend to be Chloe. He got rid of Chloe’s driver’s license and wallet and as a result fans assumed he had killed the nurse. Luckily for her, the real Chloe escaped death but the fake Chloe went down a well and did not survive.

Look for Valentin and Anna to meet with Chloe and her doctor, but they are dismayed to see she incurred a severe brain injury in Peter’s attack.

This means her memory is not 100% but you can bet Vanna will grill her anyway.
General Hospital spoilers: Will Chloe Have Secrets to Spill?

This has fans wondering, is Peter dead or alive? The mystery deepens! Throughout the month of August Sweeps this plot will twist and turn and nothing is certain at this point.

After all Peter’s body has gone missing from the GH subbasement freezer. When Anna accompanied Hamilton Finn (Michael Easton) to the nether region to see what he had done, they were gobsmacked to discover an empty freezer, with drops of blood nearby.

Are we to surmise that Peter was taken, dead or alive, from the freezer, or that he woke up and walked out of his own volition? It would be stunning if Peter showed up after all this time and after all his crimes.

Expect Valentin and Anna to be very excited to find Chloe and the potential news she can pass along. As time goes on these two continue to build a bond and the plot may result in them becoming a couple. if so, how would Finn react to that? He may have an ex to worry about, if rumors that Hayden Barnes (Rebecca Budig) returning are true!