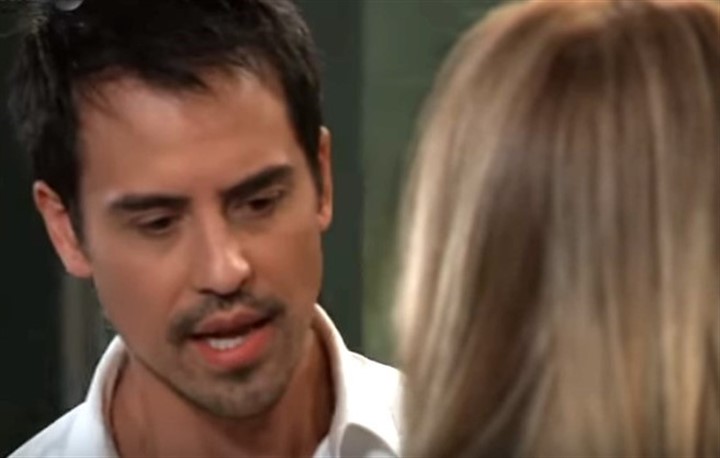 General Hospital (GH) spoilers tease that Nikolas Cassadine (Marcus Coloma) will confide to his mother that he’s worried about his son Spencer Cassadine (Nicholas Chavez) in an upcoming episode of General Hospital!

General Hospital viewers will recall that Nikolas had a major attack of foot in mouth disease as he accused Spencer of being in cahoots with Ryan Chamberlain (Jon Lindstrom) after discovering return mail that had been addressed to Spencer. General Hospital viewers will recall that Nikolas worried when his aunt Alexis Davis (Nancy Lee Grahn) told him that Harmony Miller (Inga Cadranel) had been helping Ryan write letters and send them, and possibly bring him incoming mail as well.

The file that they convinced Harmony to bring with Ryan’s mail in it consisted largely of unopened and returned mail from Ryan, and Nikolas had been horrified when Alexis found one with Spencer’s name on it. After that ill-fated conversation with Spencer happened, Nikolas realized he was wrong to make those kind of assumptions about his son, but then he will obviously worry about why Ryan had been trying to contact Spencer in the first place!

General Hospital viewers know that Nikolas may take special concern as to how Ryan would know the address of Spencer’s school in France, which is where the letter had been returned from. General Hospital viewers will recall that there had been another returned letter from Ryan to Spencer in France after he was stabbed in Pentonville by one of Cyrus Renault’s (Jeff Kober) goons. This time it looked like a greeting card as opposed to a letter.

Nikolas is now far more concerned as to why Ryan wanted to communicate with Spencer than suspecting Spencer wanted to communicate with Ryan or was in cahoots with him to break himself and Ava up. Laura can easily answer how Ryan may have gotten Spencer’s school address – Ryan had taken over Kevin Collins’ (Jon Lindstrom) life for several months and lived in Kevin and Laura’s house after Laura had gone to France to nurse Spencer back to health after he had a bad skiing accident.

General Hospital viewers can imagine that Laura, too is worried about Ryan’s interest in Spencer and his motives for attempting to contact him. Laura may ask Nikolas to open the letter, which he obviously has not done or he would not have gone off on Spencer – or he may have, depending on what Ryan wrote. Nikolas tells Laura that Spencer told him he returned the letter unopened – but then there is the postmark to consider. Was the postmark before or after Spencer finished school and went on his travels around Europe? General Hospital viewers know that if the postmark was after he left school, then Spencer had probably lied about returning it unopened to get Nikolas to calm down.

The school would have returned any mail to a student no longer attending the school to the sender! Laura considers whether opening the letter would be prudent or not – after all Nikolas shouldn’t even have it. Ryan could accuse him of stealing his mail, through Harmony’s assistance. But Nikolas and Laura both agree that the very fact that Ryan had an interest in communicating with Spencer could be a huge problem!