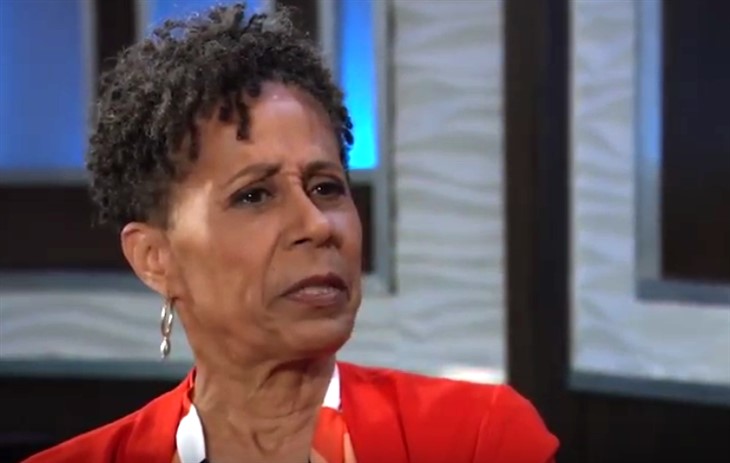 General Hospital (GH) spoilers and updates tease Stella Henry (Vernee Watson-Johnson) needs to recover from having a serious stroke. Stella had a stroke after she had different confrontations with Curtis Ashford (Donnell Turner) and Dr. Portia Robinson (Brook Kerr).

Stella has been concerned about Curtis and Portia getting into a relationship with each other. She has not wanted them to be together because they had an affair when Portia was still married to her husband Marcus Taggert (Real Andrews) many years in the past. Curtis and Portia have not been in a relationship because Curtis has been married to Jordan Ashford (Briana Nicole Henry).

GH Spoilers – Stella Henry Wants To Do What Is Right For Dr. Portia Robinson

Stella caused Portia to have trouble with her daughter Trina Robinson (Sydney Makayla). Stella and Portia got into an argument about Portia getting into a relationship with Curtis. They argued about the fact that Portia and Curtis had an affair when she was married to Taggert. Trina overheard the argument and was shocked and devastated to find out that Portia had an affair with Curtis. Stella was distressed that she could have hurt Trina. She wanted to help Portia and Trina to repair their relationship but they did not want her to help them.

Stella wants Curtis to be happy. She had believed that Curtis had found happiness with Jordan. However, Jordan and Curtis could not stay together because of the secrets that Jordan had kept from Curtis about Taggert and her work as police commissioner. Stella had not wanted Curtis with Jordan at first. However, she found a way to accept them as a couple. She wanted Curtis and Jordan to repair their relationship. Stella has started to see that Curtis has started to find love again with Portia.

General Hospital Stella will need time to recover from her stroke. She can start to bring her family together while she recovers. Curtis was upset that he might have been responsible for Stella having her stroke. Stella assured him that he did not cause her to have her stroke. Can Stella put Curtis’ mind at ease while she is recovering?

General Hospital Spoilers: Monica Gets A Second Chance With A Loved One When Drew Cain Returnshttps://t.co/im1aRZDniA

Stella can see that Portia cares about Curtis. Will Stella and Portia get closer while she is in recovery? Stella thinks that Trina is a wonderful young woman with a bright future. She can see that Portia and Trina have a close mother and daughter relationship. Can Stella help to bring Trina and Portia back together? Stella wants Jordan to find happiness. Can Stella help Jordan to find someone to be in her life after she and Curtis are divorced? Be sure to catch up on everything happening with GH right now. Come back here often for General Hospital spoilers, news, and updates.