The Bold And The Beautiful (B&B) Spoilers: Quinn’s Redemption – Saves Eric From Sheila 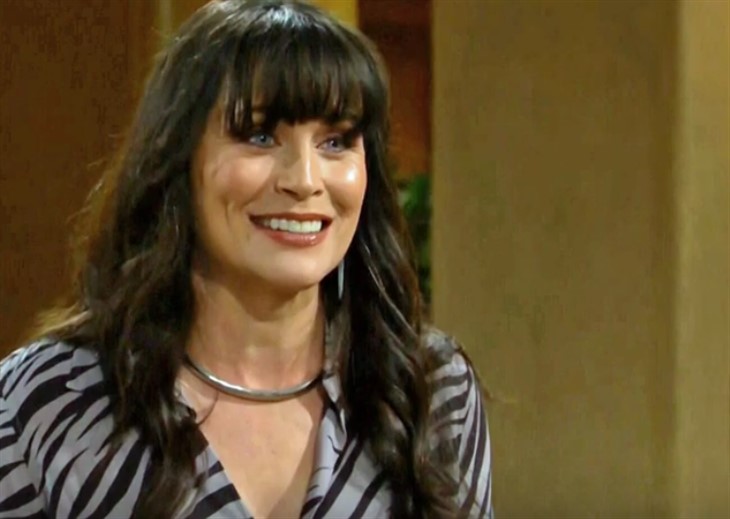 The Bold And The Beautiful Spoilers indicate that Sheila Carter (Kimberlin Brown Pelzer) is back in town and pretending to be good. However, any Forrester knows that when Sheila looks at Eric Forrester (John McCook), she sees nothing but dollar signs. Will Quinn Forrester (Rena Sofer) save Eric from Sheila?

The Bold and The Beautiful’s Quinn and Eric are separated because she cheated on Eric with Carter Walton (Lawrence Saint-Victor). Quinn and Carter are pretty close and have been hiding their continued relationship so he can keep his job. However, deep down, Quinn still loves her husband, Carter is just providing something that Eric hasn’t for some time now. Unfortunately, Carter could end up hurt when Quinn realizes that Sheila is back and targeting Eric. Quinn knows that Sheila tried to come between them before and Eric could be vulnerable to Sheila now. Will Quinn walk away from her relationship with Carter to save Eric from Sheila?

The Bold and The Beautiful’s Quinn managed to survive the last time Sheila came to town. Quinn and Eric’s marriage became stronger as the two fought a common enemy. Now that they have separated, Sheila may feel that she can use Eric’s broken heart, or at least pretend to so she can have his money. Will Eric fall for Sheila’s lies and deception? Will Eric forgive Quinn and stay with her instead? Eric is vulnerable right now but surely would not trust Sheila under any circumstances, will she try to force him to be with her?

The Bold And The Beautiful’s Sheila could easily kidnap Eric in the midst of all the confusion with her return. After all, if John Finn (Tanner Novlan) refuses to allow Sheila to see her grandson, it is hard to say what she might do. Sheila tends to use whatever means possible to get her way. Sheila could use Eric as leverage to have access to her son and grandson. Steffy Forrester (Jacqueline MacInnes Wood) isn’t about to let anything happen to her grandfather no matter what. Can Steffy protect her son and her grandfather? Would Steffy trust Quinn to deal with Sheila and save the whole family a lot of grief?

Quinn isn’t going to let Sheila beat her at anything, especially when it comes to Eric. Sheila could simply decide to kill him and get it over with. Will Quinn risking her life for Eric buy her redemption with the family?