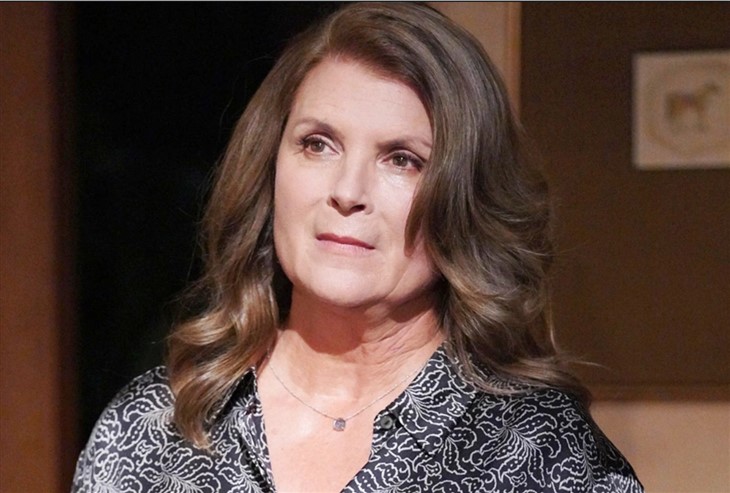 The Bold and the Beautiful spoilers document that Sheila Carter (Kimberlin Brown) didn’t have an invitation to her son’s wedding. She also didn’t contact Eric Forrester (John McCook) and request his approval to attend.

Instead, Sheila did what Sheila has always done as a disruptor. Yes, Brown’s reprised character generally steals the scenes and the episodes she’s part of.

Sheila’s brazen appearance is classic soap, as one of B&B’s greatest villains, who first appeared in 1992, is back. Yes, she will assert her rights. Access to Hayes Finnegan (no baby actor’s name known for this role) will be one of the conflict points.

The Bold And The Beautiful Spoilers – No, Sheila Carter, No!

Everyone is stunned by Sheila’s arrival. Those who know who she is and what she has done, meaning the connected characters and those viewing on the other side of the screen, are naturally taking defensive positions.

Sheila is always on offense. She either overtly projects it or is scheming to create mayhem and take charge. Eric and his family are very familiar with her history and tactics.

Jack Finnegan (Ted King) knows important information about Sheila as well, as will be detailed in coming episodes.

All had been going so smoothly for Steffy Forrester (Jacqueline MacInnes Wood) and John Finn Finnegan (Tanner Novlan). Apparently too smoothly. A lead-in show, which happened just prior to the multi-part wedding episodes, projected true bliss for Steffy and Finn, which felt ominous.

Fans of this comprehensive site were informed in early May about the very real possibility that Sheila would be revealed as Finn’s mother. Well, the tease was right.

Detractors of this terrific character may claim that Sheila’s day has passed. No, the Finn angle, that was created by the B&B staff, establishes a solid soap arc that can be ridden hard.

Bold And The Beautiful Spoilers – Maybe Change Is Possible?

Sheila could become a doting grandmother. She could be so overtaken by the sight of her grown son and his first child that a change takes place in Sheila’s heart.

Alternatively, Sheila could make nice and then inject great trauma into Finn’s life, changing him from a peaceful guy into a man who’s thrown off-course by the actions of his mentally unbalanced, just realized biological mother. However, Finn has his new wife and plenty of family members on his side. So, fans should be expecting masterful chaos to play out in daytime.