The Young And The Restless (Y&R) Spoilers: Amanda, Imani, And Naya Pick Up The Pieces And Move On 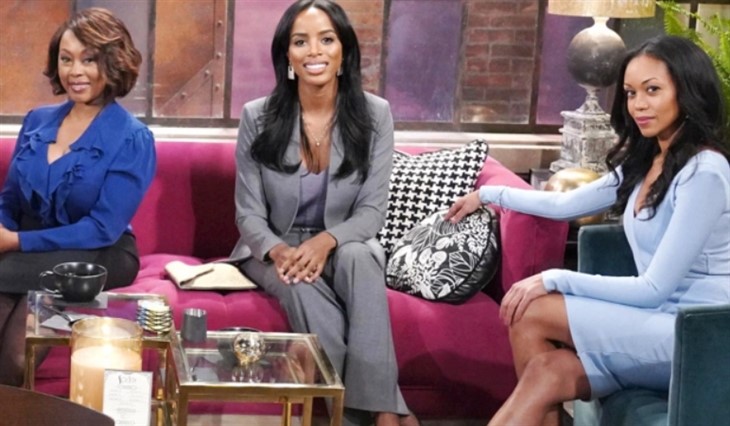 The Young and the Restless (Y&R) spoilers and updates tease Amanda Sinclair (Mishael Morgan) has been on a mission. She has wanted to bring the person who killed her father Richard Nealon (no actor’s name known for this retrospective role) to justice.

She was shocked to find out that her grandfather Sutton Ames (Jack Landron) was responsible for Richard’s death. Amanda worked with Victor Newman (Eric Braeden) to get a confession from Sutton. Amanda wanted to save her mother Naya Benedict (Ptosha Storey) from going to jail for killing Richard. Naya had confessed to the crime and had been put in jail. Amanda got her sister Imani Benedict (Leigh-Ann Rose) to help her.

Amanda wants to get justice for Richard. Amanda found out that she and her twin sister Hilary Curtis Hamilton (Mishael Morgan) were abandoned by Sutton. Amanda never got to know her sister but she has gotten to know of her by Devon Hamilton (Bryton James). Devon and Hilary were in a relationship before Hilary tragically died. Devon found himself drawn to Amanda and they are in a relationship. Amanda may pursue a legal case against Sutton if he is not brought to justice.

Imani has been upset to find out Sutton was responsible for Richard’s death. Imani has been helping Amanda to get justice for Richard and protect Naya. Amanda has valued the time that she has spent getting to know Imani and wants her to join her in creating a law firm. Imani is interested in joining Amanda in the firm.

Naya wants Amanda to get justice for Richard. Naya still loves Sutton even though he is responsible for Richard’s death. Sutton has been a successful politician. Naya feels it would be wrong for Sutton to lose everything that he worked for his whole life. Naya wants to put the past behind her. She wants the same thing for Amanda and Imani.

The Young And The Restless Spoilers: Kyle Loves Harrison But Decides To Get One More Paternity Test?https://t.co/4SDAFcTnjy

The Young and the Restless Amanda wants to find a way to put the pain of losing Richard in the past. Amanda has in a good relationship with Devon. Can Amanda let go of her need to see Sutton be punished and focus on her future with Devon? Imani wants to continue to bond with Amanda. Will Imani join Amanda in setting up their law firm? Naya wants to bring her daughters together. She is trying to come to terms with the man that she knows Sutton to be. Can Naya get past her devotion to Sutton to build a future with Amanda and Imani? Be sure to catch up on everything happening with Y&R right now. Come back here often for The Young and the Restless spoilers, news, and updates.