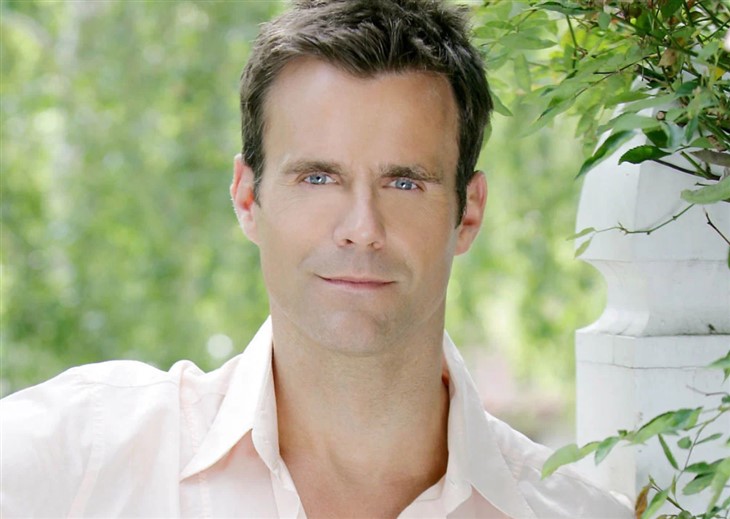 General Hospital spoilers reveal the return of Drew Cain to the Port Charles scene. Of course, he is in trouble somewhere outside Port Charles. Is he still in Afghanistan? All we know is that he is being played by soap vet Cameron Mathison and he interrupts a pivotal moment for Sam in her call.

General Hospital Spoilers – What Will Happen To Dante Falconeri And Sam McCall?

Entertainment Weekly released the first scene where Sam McCall learns that the father of her daughter is very much alive. She is sitting at the Metro Court pool with Dante and they are there alone sharing a romantic moment. Dante walks away to get them a drink and Sam’s phone rings. It’s an unknown number but she calls him anyway on a lark and it’s Drew’s voice calling her name on the other end. Sam immediately recognizes the voice, but seems a bit surprised hearing his voice, but not as shocked as she should be after thinking he was dead for the last two years.

Will Dante be able to tell Sam is a bit unnerved when he returns with their drinks? Will she tell him Drew just called and will Dante help her track him down? Expect to hear Drew’s new voice calling Sam on August 16, so just a week to go.

By the time Drew was allegedly killed, Sam was already back with Jason and Drew had stories with Oscar, Kim, and Franco. But those characters are now all gone and Sam and Drew share that Scout connection, meaning their daughter. It would make sense he would call Sam first, but is he her new love interest. Does that mean this thing with Dante has been nothing more than a flirtation? Only time will tell…

It’s Mathison who explained to Entertainment Weekly why Drew called Sam before anyone else. “Drew’s been on the show before with a different actor. So I’m reprising the role. I don’t see Sam. I actually call her to say I’m in trouble. He reaches out for a good reason. She’s obviously incredibly important to him. They’ve got a child together, which the audience already knows, and that daughter is everything in the world to him. He reaches out to Sam because he really believes that help will follow.”

Sam does have the skills to help, but what does Drew’s return mean for Sam and Dante? Stay tuned to General Hospital weekdays to find out.