The Bold And The Beautiful (B&B) Spoilers: Is Sheila Reformed – Will She Surprise Everyone? 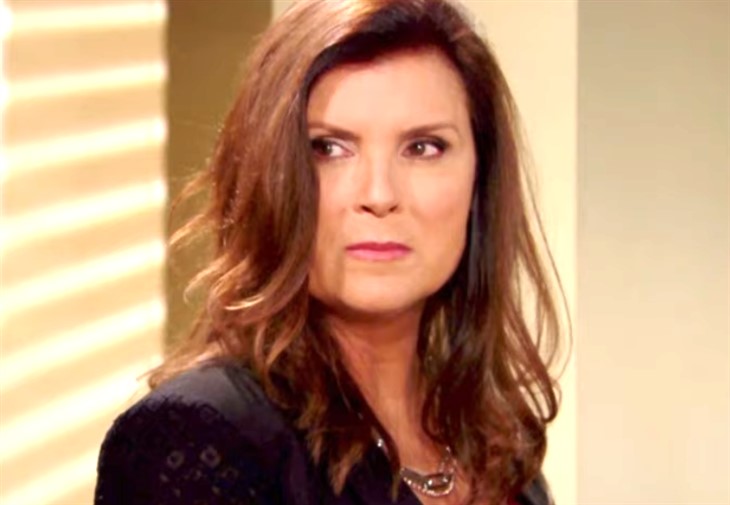 The Bold And The Beautiful Spoilers indicate that Sheila Carter (Kimberlin Brown Pelzer) has returned to town and introduced herself as John Finnegan’s (Tanner Novlan) mother. Sheila seems to be a much nicer woman and wants to get to know her son that she gave away years ago. Is she a changed woman? Does Sheila deserve to get to know her son and grandson?

The Bold and the Beautiful’s Sheila has wreaked havoc on both Genoa city and Los Angeles. Sheila has attempted to kill Lauren Fenmore (Tracy Bregman) numerous times. Sheila has also been with Eric Forrester (John McCook) and has issues with most of his family. Sheila even held the family hostage at one point. No one in the Forrester family trusts Sheila and probably never will. Sheila’s arrival could be big trouble for this new couple just starting a family. Will Sheila come between Finn and Steffy? Has Sheila changed since her last trip to town?

The Bold and The Beautiful’s Sheila was obsessed with Eric. However, Sheila has been gone for some time and could have gotten help while she was out of town. No one knows where Sheila has been since she tried to break up Quinn Forrester’s (Rena Sofer) marriage to Eric years ago. Perhaps Sheila finally saw the error in her ways and got help for herself. Could Sheila have decided to find her son she gave up and wanted to be a better person before she meets him? Will Sheila prove to Finn that she is worthy of his trust?

The Bold and the Beautiful’s Forrester family has been hurt too much by Sheila to trust that she has changed. Brooke Logan (Katherine Kelly Lang) doesn’t believe in change at all, she still doesn’t believe Thomas Forrester (Matthew Atkinson) has changed after he helped free Liam Spencer (Scott Clifton) from prison. Will anyone in the Forrest family give Sheila a chance to prove how much she has changed? Will Finn push for Steffy to accept his birth mother into their lives only to find out that she hasn’t changed at all?

The Bold And The Beautiful Spoilers: Will Finn’s Love Change Sheila – Turns Baddie Into Good Grandmahttps://t.co/K2yt55iShA

Sheila may pretend to want to play nice with everyone in Los Angeles. However, the chances of this super villain changing is not very likely. Will Sheila prove herself worthy of her son and grandson? Could Sheila try to take the baby as a replacement for Finn and raise him as her own?