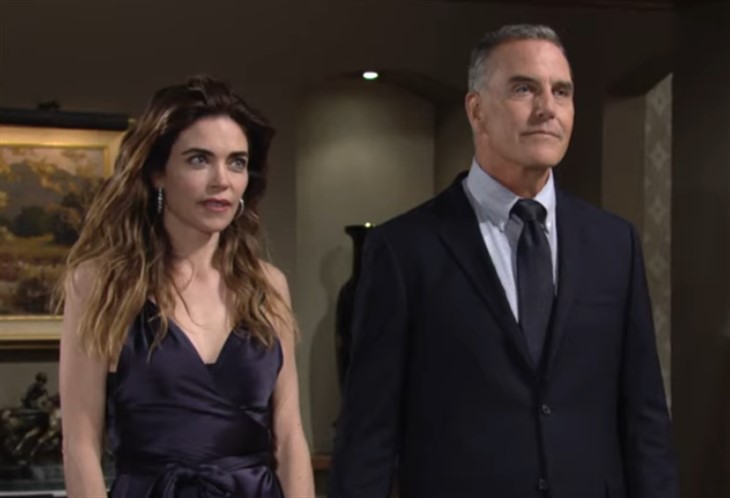 The Young and the Restless (Y&R) spoilers document that Victoria Newman (Amelia Heinle) is going with her heart. She’s fallen fully in love with Ashland Locke (Richard Burgi), never expecting that would be the case.

After some initial skepticism was warranted, based on business dealings, it appears as though Ashland truly is dying of cancer and isn’t lying or exaggerating. He also seems to be devoted to Victoria and isn’t simply rebounding away from the now jailed Tara Locke (Elizabeth Leiner).

So, Vashland seems to be set for marriage. Ashland’s offer of marriage and Victoria’s acceptance sets up a soon-to-be wedding on Y&R.

The Young And The Restless Spoilers – Victor Newman Approves, Probably

Victor Newman (Eric Braeden) took to Ashland from the start. He was impressed that his now business partner shrugged off the Moustache’s withholding of medical assistance in order to finalize the Cyaxares sale.

For his part, Ashland likes Victor and Adam Newman (Mark Grossman), seeing them as fellow colleagues. Moving from New York to Genoa City, Wisconsin, where Burgi’s character expects to live out the last months of his life, also means that Victor is set to become his father-in-law and Adam his brother-in-law.

That’s quite the development, even for this soap opera.

Vashland has little to do with what Villy was or what Victoria may have wanted it to be again. Yes, Billy Abbott’s (Jason Thompson) connection with Lily Winters (Christel Khalil) wasn’t something that Victoria approved of. But she’s realized that BiLily is real and lasting.

So, having Ashland offer his attention, which has now been followed by a pledge of his heart, naturally had a profound effect on Victoria. The anticipated shortness of Ashland’s lifespan has also impacted Vashland’s feelings and personal merger time frame.

The Young And The Restless Spoilers – Ashland Locke Becomes A Memory Or Mainstay?

It would be great to have this daytime veteran remain part of the ensemble indefinitely. But that would require at least a remission announcement or a full cure. How believable would either outcome be?

So, if Ashland becomes a memory, then Victoria will have experienced short-term, intense love that was real. She’ll also have added a valuable piece to Newman Enterprises’ portfolio.

If Ashland becomes a mainstay, then he’ll also be a major player on Y&R. The opportunities for indefinite drama, with various characters, including Heinle’s, makes that the preferred option. Here’s hoping that it’s realized, as this humanized version of Burgi’s character is very interesting.