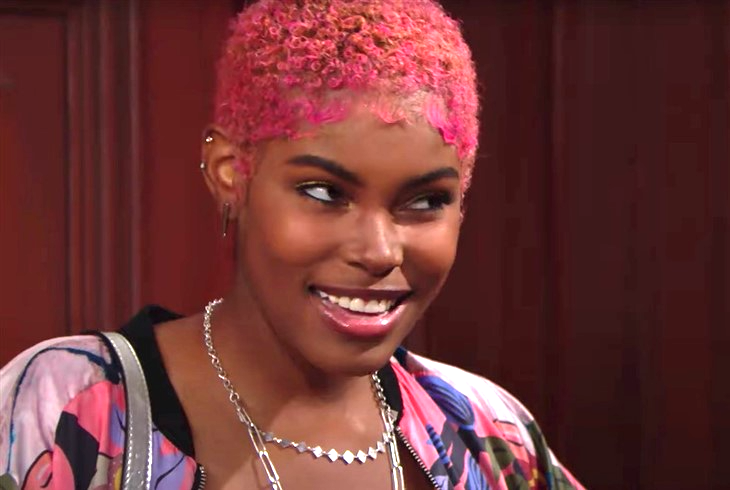 The Bold and the Beautiful spoilers reveal that Paris Buckingham (Diamond White) agrees to keep John “Finn” Finnegan’s (Tanner Novlan) secret. As Finn continues to confide in her, the two will create a bond. Could this bond and a shared secret cause Finn and Paris to cross lines right under Steffy Forrester’s (Jacqueline MacInnes Wood) nose?

The Bold And The Beautiful Spoilers – Paris Buckingham’s Perfection

B&B spoilers reveal that Paris seems to believe that she is perfect. When she first came on the soap, she was definitely considered the better of the Buckingham sisters. However, the way she reacted to Quinn Forrester (Rena Sofer) and Carter Walton’s (Lawrence Saint-Victor) affair was over the top.

The Bold And The Beautiful (B&B) Spoilers: The Forresters And Spencers Worry What Stunt Sheila Will Pull Next

Sure, what “Quarter” did was shocking and a betrayal to Eric Forrester (John McCook). However, she kept going on and on about it as if she would never commit such a sin. It’s funny how things like that get turned around, especially in soaps.

Finn has just learned that Sheila Carter (Kimberlin Brown) is his birth mother. He brought her to the wedding reception so everyone could meet her. He was excited and couldn’t believe that he actually ran into his biological mother on his wedding day. However, everyone didn’t have the reaction that he expected.

Next week, Finn will be torn over Steffy’s demand and bonding with Sheila. He will decide to keep in contact with his birth mother and will keep it from Steffy. He does end up confiding in someone, though.

The Bold And The Beautiful Spoilers – Sharing Secrets And Creating Connections

The Bold and the Beautiful spoilers reveal that Finn tells Paris the truth about his secret. He will explain why he feels so torn and how much he believes in redemption. Sheila will be telling him all the things that Finn wants to hear. She will also be playing on his emotions and the void he felt growing up. Paris agrees to keep Finn’s secret and the two will continue to talk about everything Finn is learning about Sheila.

B&B Spoilers: Eric Wants Quinn Back – Will She Give Up Carter?https://t.co/agNJy1kmWS

It is teased that Paris and Finn’s bond will continue to deepen. While this doesn’t mean they will have an affair, it could lead them to cross the line in other ways. That means they both will betray Steffy in more ways than one. How will she deal with this when the truth finally comes out? Is there any possible way of “SINN” surviving all the secrets, lies and betrayals? We will have to keep watching the CBS soap to find out what happens next with this storyline.