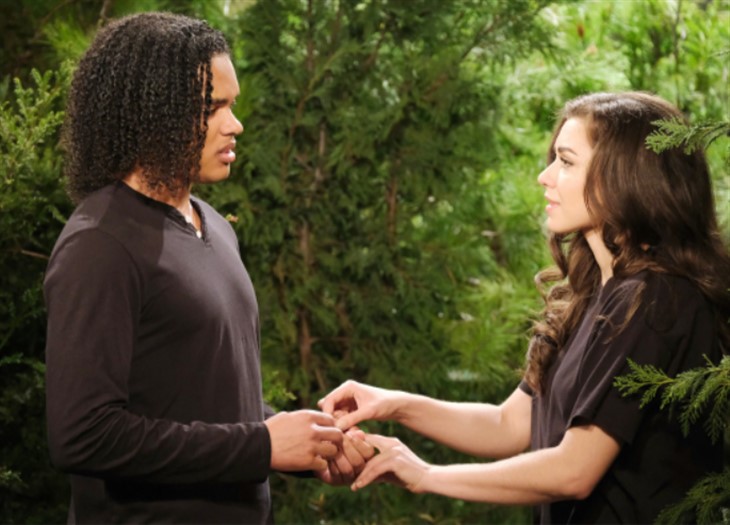 Days of Our Lives (DOOL) spoilers reveal that Ben Weston (Robert Scott Wilson) and Ciara Brady (Victoria Konefal) reunite. After making love, Ciara makes a shocking admission regarding her relationship with Theo Carver (Cameron Johnson). What is this confession, how does Ben react and what does it indicate about Ciara’s romance with Theo?

DOOL spoilers reveal that Ciara finally gets her memories back. It’s all due to Ben insisting that she open a fortune cookie. She did as he requested but the fortune was puzzling. It only had one word, which was “yes.” As Ciara started to walk out the door, three years of missing memories started rushing back all at once.

Days Of Our Lives (DOOL) Spoilers: Paulina Angers Lani When She Tries To Help Theo

Ben’s last chance to get Ciara to remember actually worked. As many fans suspected, it would be at the last possible moment. Ben and Ciara have a romantic reunion, but there are people they need to inform of the big change. For one, the police need to know because Claire Brady (Isabel Durant) and Allie Horton (Lindsay Arnold) are facing criminal charges. Of course, Theo needs to know as he has been worried sick about his kidnapped bride.

Days of Our Lives spoilers reveal that as Ben and Ciara reunite, Theo and Shawn Brady (Brandon Beemer) enter the cabin. Shawn stays with Ben while Ciara takes Theo outside to talk to him privately. Even though Ciara never meant to hurt Theo, he will have a broken heart. At the same time, Theo knew there was always a chance that Ciara’s memories could return one day.

After Shawn and Theo leave the cabin, “CIN” makes love for the first time since their nightmare began. Afterward, Ciara makes a shocking admission about her romance with Theo. Despite her plans to marry Theo, Ciara was never intimate with him. Wilson explained to Soap Opera Digest,

“He thought she did, seeing as how she was ready to marry the man. He thought at least they hooked up while she was trying to forget about old Benny Boy, but he’s very happy and relieved to hear that. It just makes it that much better.”

After Ciara makes the admission, Ben has a confession of his own to make. Ben tells her about his kiss with Claire. Ciara understands it and doesn’t hold it against him. Later, Ben and Ciara return to Salem, where they get their wedding rings. Ben immediately proposes and of course, Ciara says yes. Marlena Evans (Deidre Hall) is on hand to make their marriage official. As for the future, Wilson says that “CIN” is going to get some happiness for a little while.