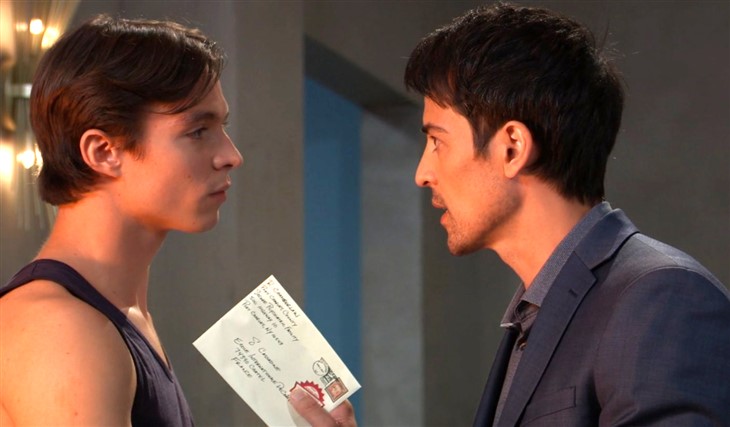 General Hospital viewers will recall from recent episodes of General Hospital, that Nikolas learned that it has not been Ryan Chamberlain who has been stalking Ava Cassadine, (Maura West) or someone working for him, but his own son, Spencer Cassadine (Nicholas Chavez) who has been the stalker!

Spencer has been copycatting Ryan to scare Ava away from Nikolas and to break them up. Spencer stopped after he was very nearly caught red-handed – we–l, red-footed – after rigging the sprinkler system of the Jerome Gallery with fake blood. Poor Trina Robinson, (Sydney Mikayla) who Spencer has been interested in, bore the brunt of the fake slasher movie scene. Spencer quickly got rid of his shoes when word reached to him that police had found footprints!

General Hospital viewers will recall that the last straw for Ava came when she discovered that someone had delivered a talking teddy bear to Avery Jerome-Corinthos (Ava and Grace Scarola). The teddy bear spoke with Ryan’s voice and said very creepy things. This was when Ava and Nikolas took Avery and moved to a suite in the Metro Court, thinking they would be safe there.

Detective Dante Falconeri (Dominic Zamprogna) himself had made the suggestion after Ava and Nikolas found a photo of them together pinned to the front door with a hunting knife at Wyndemere Castle. Ava even took the extreme step of bringing Avery over to the Corinthos compound to keep her safe, something which normally she would never do, considering the custody battles between the Corinthos family and herself over Avery! Of course, the teddy bear’s voice had to have been recorded with a voice disguising device since Ryan is unable to speak due to locked-in syndrome.

General Hospital (GH) Spoilers Thursday, August 12: What Will Ava Jerome Do With The Truth? https://t.co/uZ4oJiuGZh pic.twitter.com/oNQ46Zt0vI

Nikolas decides to gaslight Spencer like Spencer has been gaslighting Ava, and in addition to crashing his party at Wyndemere Castle dressed like the grim reaper with one hand, he decides to replicate the fear of the teddy bear’s voice. Nikolas obtains voice disguising equipment and places a call to Spencer with Ryan’s voice.

However, Spencer may not be convinced – after all, he’s done similar things. Later, Spencer will go to Spring Ridge Prison to visit his great aunt Alexis Davis (Nancy Lee Grahn) but he may have the ulterior motive of seeing Ryan and his condition for himself! Spencer may be smart enough to figure out that someone is trying to “pay him back in kind”!