The Bold And The Beautiful Spoilers: How Will Finn And Steffy Handle Sheila? 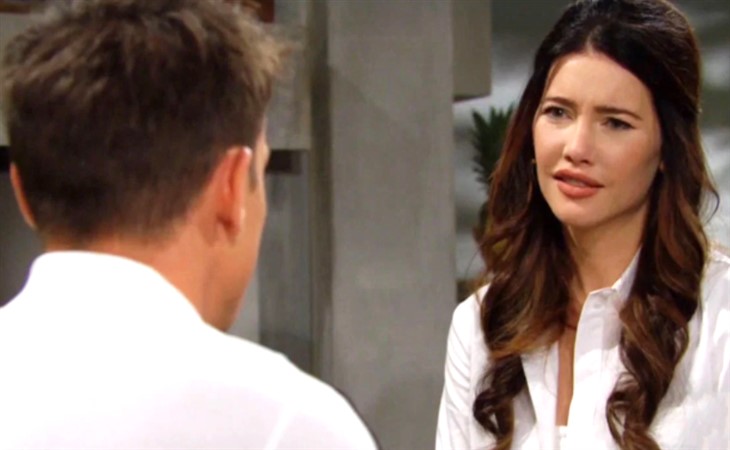 The Bold and the Beautiful spoilers and updates tease that John “Finn” Finnegan’s (Tanner Novlan) and Steffy Forrester (Jacqueline MacInnes Wood) will try to determine the best way to deal with Sheila Carter’s (Kimberlin Brown). How will the shocking revelation about Finn’s true birth mom affect the newly-wed couple’s relationship?

Sheila tells Finn that she’s been watching over him from afar. But now she’s ready to be part of his life and bond as mother and son. Sheila’s decision to reveal the truth may have been influenced by the knowledge that she already has a grandson, Hayes Forrester Finnegan. She wants to get to know his son and his grandson.

Finn offers to take Sheila back to the wedding reception. She’ll accept the offer even if she knows she’ll face some backlash, especially the Forresters. Finn’s decision to bring Sheila to the wedding party won’t sit well with Steffy. She’ll be furious and call her a monster. Finn will hear all about Sheila’s past. He may feel conflicted but he’ll still want to know more about her birth mother.

His desire to get closer to her mother will take a toll on his marriage. It won’t take too long before Steffy demands that Finn cut his contact with Sheila, which could be something that Finn won’t agree to.

Ridge Forrester (Thorsten Kaye) steps up and throws Sheila out of Eric Forrester’s (John McCook) home! The other guests will agree with Ridge’s move. However, Finn and Steffy will find it difficult to come to a decision on how they should deal with the problem.

Finn will lie to Steffy as he tries to find answers about his past from Sheila and fill the void that he’s been feeling all these years. But he doesn’t want to hurt Steffy, so it’s not surprising if he decides to keep his meetings with his birth mother a secret.

Steffy may sense that something’s wrong. She may notice Finn’s unusual behavior and start to suspect that he’s hiding something. She’ll definitely feel hurt when she finds out that Finn is sneaking around to visit Sheila behind her back. Sheila will put a strain on the marriage of Steffy and Finn. Will the couple weather the storm?