General Hospital (GH) Spoilers: Ava Seeks Out Kevin For A Professional Opinion, Haunted By Her Past 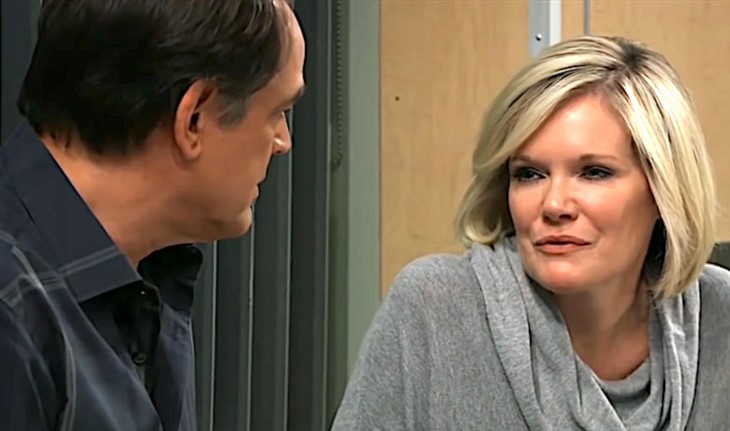 General Hospital spoilers tease that Ava Cassadine (Maura West) will seek out Kevin Collins (Jon Lindstrom) for a professional opinion in an upcoming episode of General Hospital. Ava is still haunted by her past, especially in relation to what she endured at the hand of Ryan Chamberlain (Jon Lindstrom)!

General Hospital viewers will recall that Ava went through hell on earth thanks to Ryan’s impersonating Kevin, and then her finding out she’d been dating her daughter’s killer when the truth came out. Ava even pretend-dated Kevin for a time after he had been rescued from Ferncliff, in an effort to draw Ryan out of hiding. General Hospital viewers will recall that Ryan was finally brought to justice after Ava stabbed him in the back, and he was incapacitated.

Then, several in General Hospital conspired to donate one of his kidneys to a dying Port Charles Police Commissioner Jordan Ashford (Briana Nicole Henry) as a last resort to save her life. Kevin was a match, but because of his long captivity, health issues wouldn’t allow him to donate. Ava starts by talking to Kevin about Nikolas Cassadine’s (Marcus Coloma) suspicions that Spencer Cassadine (Nicholas Chavez) is the stalker!

General Hospital viewers will recall that Nikolas came to talk to Ava about his suspicions that Spencer was the stalker, given that Ryan is “locked in”. Nikolas saw firsthand when he saw Ryan in Spring Ridge prison while he visited Alexis Davis (Nancy Lee Grahn). Ava talks to Kevin and finds out that Kevin thinks there might be something to Nikolas’ suspicions, but he in no way minimizes the fear that Ava has experienced thinking that it could be Ryan!

Kevin assures her that Ryan is physically not able to be a threat, although he could conceivably voice threats in writing with help – which he has been made aware of. Kevin knows that Harmony Miller (Inga Cadranel) is helping Ryan communicate but he’s not her only patient in Spring Ridge Prison. General Hospital viewers will recall that Kevin was heading over to Spring Ridge to see what was going on with Ryan, and that would be how he found out.

General Hospital viewers know how traumatized Ava has been in recent episodes of General Hospital – even though she was brave and gutsy when she stabbed Ryan in the back with his own knife, in the relative calm since then her fears have come to the surface. That is the very nature of post-traumatic stress disorder, or PTSD – Ava is not the only one to experience it.

People push down their fears in the situation at the time but then in a time of peace, they are triggered. For Ava, the anatomical hand and the teddy bear with Ryan’s voice is what caused all her fears to come back to the surface, and the slasher movie scene in her gallery that cost her insurance a pretty penny didn’t help! Kevin knows that just proving that the stalker isn’t Ryan won’t alleviate Ava’s fears or keep her trauma from coming to the surface. But he can assure her that Ryan can never cause any harm himself again!