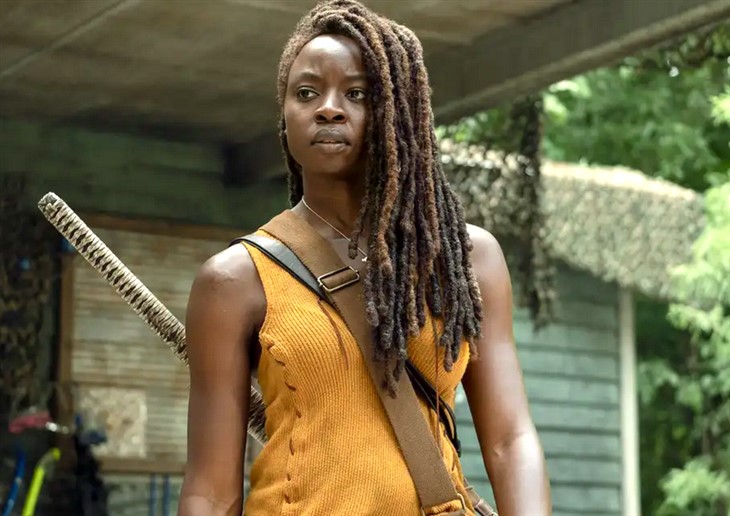 As The Walking Dead fans begin the countdown to the season 11 premiere on Sunday, August 22 at 9/8c, the show-runner for TWD’s final season has decided to dish up teasers.

Add those potential spoilers to the recently released season 11 trailer for The Walking Dead, and we’ve got plenty to talk about as we eagerly await the premiere!

So don your post-apocalypse pajamas as we hunt for clues from show-runner Angela Kang’s recent revelations.

The Walking Dead: If Rick Grimes Returns He Will Get A Frosty Reception

Throughout the past 10 seasons of The Walking Dead, we’ve learned to expect the unexpected.

As a result, loyal fans of The Walking Dead hope that the 11th and final season will live up to that tradition by delivering even more twists.

What could happen? TWD show-runner Angela Kang offered some hints.

And one intriguing note: Kang revealed that after uncertainty in spring about exactly how season 11 would end, she and the writers have finalized their end point.

“Yes, I believe I know how ‘The Walking Dead’ ends,” Angela told the Insider.

But with The Walking Dead season 11’s last episode anticipated to stream towards the end of next year, Kang hinted that some plot holes remain.

“We pitched it all out to AMC and everybody’s on board,” The Walking Dead boss shared.

“As we get into individual episodes, we’re still kind of refining and mapping as we change things we’ve planned a little bit. But the roadmap is firmly in place at this point.”

Kang also compared what The Walking Dead comic creator Robert Kirkman knew about the finale to her knowledge of the TV show’s last episode.

It’s particularly relevant given that The Walking Dead show reflects the world of TWD comic.

So given that Kirkman revealed he knew the end of the comic for four years, we might assume that the show-runner, producers, and writers have known the details in the last season of the show for some time.

Kang declined to specify a timeline.

“Internally working on the show, we had guesses [for how it ends],” explained The Walking Dead show-runner. “[Kirkman] set up this father/son story, but even then he managed to kind of surprise us with exactly how he ended it.”

But beyond the fact that the comic so abruptly ended, Kang has faced cast shifts that left her changing around certain characters’ story arcs.

The Walking Dead: If Rick Grimes Returns He Will Get A Frosty Reception @SoapOperaSpy https://t.co/2m4CWRNI51

As a result, The Walking Dead writers and producers have come up with two tactics.

First, more recent characters will fill out the arcs. That approach includes Michonne finding out new information about her much-missed child, Elodie.

Second, the writers have crafted new story arcs, such as a group known as the Reapers.

“Obviously, we don’t have the same array of characters, so I think some of our thoughts, in terms of specifics have changed over time,” pointed out Kang.

“But I think in terms of telling one story that sort of thematically points in a kind of a direction, I think we’ve had that in mind for a while,” she added.

Be sure to check back on our site for all the news about The Walking Dead as we count down to the premiere!