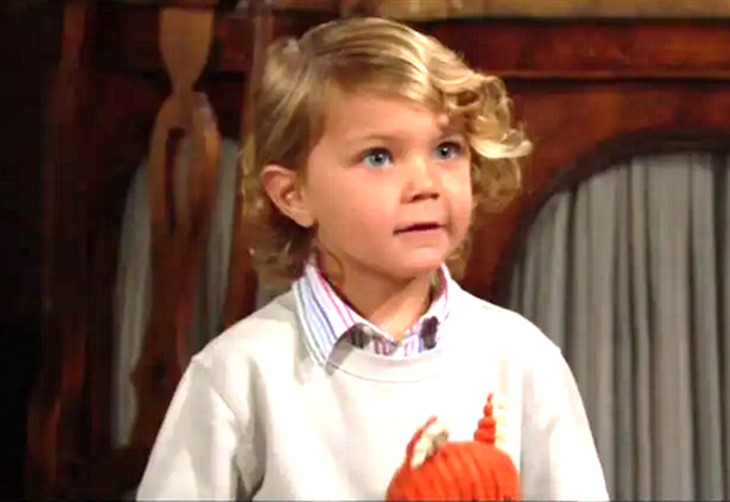 The Young and the Restless (Y&R) spoilers tease that one little Genoa City, Wisconsin boy is at the center of a gigantic custody debate. Harrison Locke (Kellen Enriquez) has two dads, the one who raised him Ashland Locke (Richard Burgi) and the one he just met, his biological father Kyle Abbott (Michael Mealor).

One is dying and one has run off to Paris, and they both want him. Who gets to decide the boy’s fate? Certainly not his mom who is cooling her jets in jail and looks to be locked up for a long time.

The Young And The Restless Spoilers  – Who Gets Custody Of Harrison?

Tara Locke (Elizabeth Leiner) is Harrison’s mom and she’s just been arrested, leaving Ashland and Kyle to fight over Harrison. Co-executive producer/head writer Josh Griffith previewed the outcome of this custody battle in an interview with Soap Opera Digest. According to him, Kyle wants Harrison to join him in his new life in Paris and Ashland is not pleased with Kyle’s request to take the boy out of the country.

“Ashland is feeling frustrated as he’s had several unsuccessful attempts to reach Kyle.”

Y&R Spoilers – Victor Newman Is On To Ashland

He goes on to say that Ashland is feeling the effects of chemotherapy and that together with his displeasure with Kyle could mean the boy is in for a nasty custody battle. Ashland is dying, or so he says. Has anyone ever talked to his doctor or viewed his medical records?

Victor Newman (Eric Braeden) wants to get to the truth as Ashland is now engaged to his daughter Victoria Newman (Amelia Heinle). But after blustering at Ashland, Victor seems to have backed down in his attempts to get to the bottom of things. Or has he?

Y&R Spoilers: Lily Has Had Enough Of Billy – Ashland Gets Bossy https://t.co/pwzjTgNRkT pic.twitter.com/JlWTIvsA9K

The Young And The Restless Spoilers – What Will Ashland Locke Say?

Victor accused Ashland of faking his illness so as to get his hands on Newman Enterprises. Ashland offered to let him view his medical records but will Victor follow up on the offer?

In the meantime Ashland is using his illness as a reason to keep Harrison in the country. “Ashland makes it very clear … that any decision he makes about Harrison will be in Harrison’s best interest,” says Griffith. Does this mean Ashland wants to keep the boy close in his dying days, or does it mean he is ready to capitulate and let him be with Kyle?